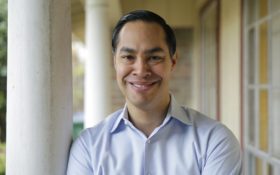 Former Obama housing chief Julian Castro says he’s taking a step toward a possible White House campaign in 2020 by forming a presidential exploratory committee. The Texas Democrat tells The Associated Press that he will announce a decision Jan. 12.

The move Wednesday gives the 44-year-old former San Antonio mayor an early start to what’s shaping up as a crowded Democratic field without a clear front-runner to challenge President Donald Trump.

Castro indicated in an AP interview that his mind was all but made up.

“I know where I’m leaning, for sure,” said Castro, who has said for weeks that it was likely he would seek the nomination.

An exploratory committee usually is a formality before a candidate launches a presidential campaign. It legally allows potential candidates to begin raising money.

But just as important for Castro, the step gives him an early jump on bigger name Democrats who are considering running but are taking a slower approach.

No potential contender is more ascendant than outgoing Rep. Beto O’Rourke, who lost last month in a surprisingly close race against Sen. Ted Cruz, R-Texas. O’Rourke has excited donors and activists who are now prodding him to seek the presidency.

Castro would be among the youngest candidates in the field and the most prominent Latino. He played down the attention that others are generating and pointed to past election cycles in which early favorites ended up faltering.

“People might say right now, ‘Well, hey, you’re way down here in polling that’s taken.’ The most dangerous place to be right now is actually in the pole position,” Castro said. “It doesn’t bother me that in December of 2018 I’m not right up at the top of the list. If I decide to run, it would be because I believe I have a compelling message and I’m going to work hard and get to the voters and I believe I can be successful.”

“He’s talented. He ran a good race against Ted Cruz,” Castro said. “I’ll let him talk about his future.”

Castro said he has not spoken to former President Barack Obama about his potential candidacy but plans on consulting Democratic leaders. Obama has spoken to O’Rourke, who has said he won’t make a decision on 2020 until after leaving Congress in January.