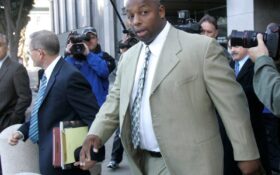 Former San Francisco 49er Dana Stubblefield was convicted Monday of the rape of a developmentally disabled woman, after prosecutors said he lured the victim to his home with the promise of a babysitting job.

A jury found Stubblefield, 49, guilty of rape by force, oral copulation by force and false imprisonment, and acquitted him of raping a person incapable of giving consent, The San Francisco Chronicle reported.

Jurors also found that Stubblefield used a gun during the assault, prosecutors said.

Stubblefield could face 15 years to life in prison. He was a defensive lineman for the San Francisco 49ers and the Oakland Raiders.

The verdict came after a nine-month trial, and five years after the victim reported the April 2015 sexual assault to police, the newspaper said.

A day before the assault, Stubblefield contacted the then 31-year-old woman on a baby-sitting website and arranged an interview, prosecutors said.

According to a report by the Morgan Hill Police Department, the interview lasted about 20 minutes. She later received a text from Stubblefield saying he wanted to pay her for her time that day, and she went back to the house.

After raping her, Stubblefield gave her $80 and let her go, according to the report. The woman immediately went to police and reported the rape. DNA evidence matched that of Stubblefield, the report said.

Defense attorneys argued that there was no rape and that the woman consented to sex.

Allen Sawyer, one of Stubblefield’s trial attorneys, described the incident as a “paid encounter for sex.” He said the defense team was precluded from showing the jury strong evidence that would have supported the contention.

“There’s a lot of information that we have, that the jury was not allowed to have, that we think would have been impactful to their decision,” Sawyer told the Chronicle Monday after the verdict was read.

“We expect to keep fighting for Mr. Stubblefield’s innocence,” Sawyer said. “We will clear his name, and we look forward to fighting this out in the courts. This is just the first battle.”

Stubblefield was remanded to jail without bail, pending sentencing.

Stubblefield was drafted by the 49ers in 1993 and named to the NFL All-Pro team from 1994 through 1997. He spent the next three seasons with Washington, then played two more years with the 49ers and a final season with the Raiders before retiring at the start of the 2004 season.

In his final season, the NFL fined Stubblefield and three other Raiders for testing positive for steroids. In 2009, a federal judge fined him $5,000 and placed him on two years’ probation for lying to an IRS agent about his steroid use, the Chronicle said.