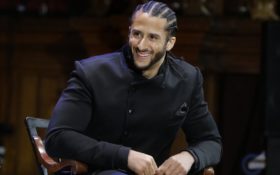 Colin Kaepernick can add author and publisher to his resume.

The former NFL quarterback who knelt during the national anthem to protest racial injustice and police brutality announced Thursday he’s writing a memoir through his own publishing company.

It’s called Kaepernick Publishing, and the audio version of the currently untitled book due later this year will be available through Audible, a subsidiary of Amazon.

In 2013, Kaepernick led the San Francisco 49ers to the Super Bowl, where they lost to the Baltimore Ravens. He knelt during the anthem in 2016 and dozens of players initially joined him. It created a national debate and drew criticism from President Donald Trump.

The 32-year-old Kaepernick has been out of a job in the NFL the last three years. He filed a grievance against the NFL, contending teams colluded to keep him out. The sides reached an undisclosed settlement.

Kaepernick will write about that experience and what prompted his activism. Lately, he’s been reaching audiences around the country through the Know Your Rights Camp, which he founded. It instructs youths on understanding their rights, education and interacting with law enforcement.

“My protest was the culmination of years of thought and experiences, of learning and unlearning,” Kaepernick said in a statement. “I want to tell the story of my evolution, and the events that led me to protest systemic oppression, in hopes that it will inspire others to rise in action.”

Kaepernick says he still wants to play football. A chaotic NFL workout in November in Atlanta was moved to another location with fewer scouts after Kaepernick was unhappy with the rules the league placed on the session. That resulted in no job offers.

In his newest career, Kaepernick says he plans to release content from authors of color through Audible.