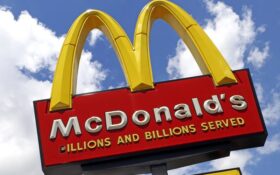 Former McDonald’s CEO Stephen Easterbrook has been charged by federal regulators with making false and misleading statements to investors about the circumstances of firing by the burger giant in November 2019.

Easterbrook was ousted for engaging in an inappropriate personal relationship with a McDonald’s employee in violation of company policy, the Securities and Exchange Commission said in its order Monday, but the separation agreement with McDonald’s concluded that his termination was without cause, which allowed him to keep substantial equity compensation that otherwise would have been forfeited.

McDonald had fired Easterbrook in November 2019 after he acknowledged exchanging videos and text messages in a non-physical, consensual relationship with an employee. Easterbrook told the Chicago company at the time that there were no other similar instances.

The SEC said that Easterbrook knew or was reckless in not knowing that his failure to disclose additional violations of company policy before his firing would influence McDonald’s disclosures to investors related to his exit and compensation.

“When corporate officers corrupt internal processes to manage their personal reputations or line their own pockets, they breach their fundamental duties to shareholders, who are entitled to transparency and fair dealing from executives,” said Gurbir Grewal, the SEC director of the Division of Enforcement. “By allegedly concealing the extent of his misconduct during the company’s internal investigation, Easterbrook broke that trust with – and ultimately misled – shareholders.”

Easterbrook, who has not admitted or denied the SEC’s findings, has agreed to the agency’s cease-and-desist order, which imposes a five-year officer and director ban and a $400,000 civil penalty.

McDonald’s Corp. was also charged by the SEC in the incident, the agency said Monday, but due to the company’s cooperation during the ensuing investigation, there is no financial penalty.