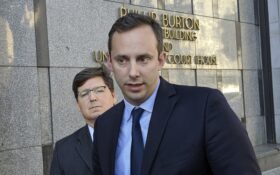 A former Google engineer has been sentenced to 18 months in prison after pleading guilty to stealing trade secrets before joining Uber’s effort to build robotic vehicles for its ride-hailing service.

The sentence handed down Tuesday by U.S. District Judge William Alsup came more than four months after former Google engineer Anthony Levandowski reached a plea agreement with the federal prosecutors who brought a criminal case against him last August.

Levandowski, who helped steer Google’s self-driving car project before landing at Uber, was also ordered to pay more than $850,000.

Alsup had taken the unusual step of recommending the Justice Department open a criminal investigation into Levandowski while presiding over a high-profile civil trial between Uber and Waymo, a spinoff from a self-driving car project that Google began in 2007 after hiring Levandowski to be part of its team.

Levandowski eventually became disillusioned with Google and left the company in early 2016 to start his own self-driving truck company, called Otto, which Uber eventually bought for $680 million.

Before leaving Google, though, Levandowski downloaded a trove of Google’s self-driving car technology, resulting in him facing 33 counts of intellectual property theft. He wound up pleading guilty to one count, culminating in Tuesday’s sentencing.

The accusations turned Levandowski, once highly regarded for his early inroads into self-driving cars, into a notorious figure “almost synonymous with greed run amok in Silicon Valley,” his own lawyers acknowledged in court documents filed last week.

The lawyers argued Levandowski deserved some leniency because there was never any evidence that he used Google’s trade secrets while overseeing Uber’s self-driving car division. He lost that job in 2017 while asserting his Fifth Amendment right against self-incrimination when Uber was still defending itself against Waymo’s lawsuit.

Uber settled its case with Waymo for $245 million a few days into a trial that featured its former CEO, Travis Kalanick, speaking about some of his discussions with Levandowski about the ride-hailing service’s desire to win the race to build self-driving cars.

Levandowski, 40, faced a maximum prison sentence of 10 years and a $250,000 fine. Besides sentencing Levandowski to 18 months in prison, Alsup fined him $95,000 and ordered him to pay Waymo $756,499 to reimburse the company for the costs it incurred in helping the government with its investigation.

It appears uncertain whether Levandowski will be able to make the payments. He filed for bankruptcy earlier this year after another court upheld an arbitration ruling requiring him to pay Google $179 million, most of which consisted of a bonus he received for his work on self-driving cars.

In its victim statement, Waymo told Alsup that Levandowski’s “misconduct was enormously disruptive and harmful to Waymo, constituted a betrayal, and the financial effects would likely have been even more severe had it gone undetected.”

In documents arguing why Levandowski deserved prison time, U.S. Attorney David Anderson called his theft a “brazen and shocking” act that seemed driven by ego as much as greed.

“Levandowski’s actions suggest he wanted to be seen as the singular inventor of the self-driving car, the way Alexander Graham Bell is credited with inventing the telephone,” Anderson wrote.