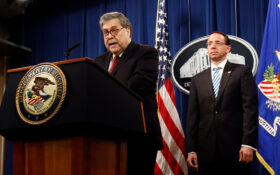 A former public affairs officer for the Drug Enforcement Administration has pleaded guilty to pretending to be an undercover CIA agent to persuade companies seeking business with the agency to give him millions of dollars.

At a plea hearing Thursday in federal court in Alexandria, Virginia, Garrison Courtney admitted he enlisted multiple public officials to lend legitimacy to his scheme by telling them they had been selected to participate in a classified CIA program.

Courtney cheated multiple companies out of more than $4 million between 2012 and 2016 by convincing them to put him on his payroll, according to plea documents.

Courtney told companies he was affiliated with a cover CIA operation called Alpha-214, and that he needed to be placed on their payroll to cover up the fact that he was a government agent. He said the companies would be reimbursed in the form of lucrative government contracts.

He leaned on his time as a former public affairs officer with the DEA to enlist public officials to give generic briefings that lent legitimacy to his business dealings with the various companies.

He pleaded guilty to a single county of wire fraud and faces up to 20 years in prison when sentenced.