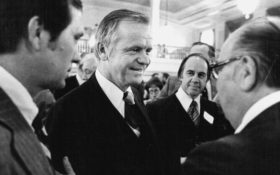 Bergland died at a nursing home in his hometown of Roseau, near the U.S.-Canadian border, his daughter Linda Vatnsdal said. He had been at the nursing home for about a week after a couple of weeks in a hospital, she said.

As agriculture secretary, Bergland had the difficult job of defending to Midwest farmers Carter’s unpopular 1980 decision to embargo grain sales to the Soviet Union after the invasion of Afghanistan in 1979.

Vice President Walter Mondale recalled Sunday that both he and Bergland did not like the grain embargo.

“I don’t think it was good policy,” Mondale told The Associated Press on Sunday. “This is going to mean Russians are going to buy their grain somewhere else. … I urged the president not to do it. He felt he had to do it.”

Carter lost his re-election bid to Ronald Reagan, and Bergland’s term as agriculture secretary ended with the Carter administration in 1981.

“Carter felt very positive about him. He was very successful in that position. Farmers liked him. That’s a tough job. People in agriculture respected him, and he was always doing very well there,” Mondale added.

Bergland, a Democrat, was a U.S. House member from 1971 to 1977 before becoming agriculture secretary under Carter. While heading the U.S. Department of Agriculture, Bergland commissioned a major report on the structure of American agriculture, “A Time to Choose,” and also a USDA study on organic farming. He later served as vice president and general manager of the National Rural Electric Cooperative Association and as a regent at the University of Minnesota.