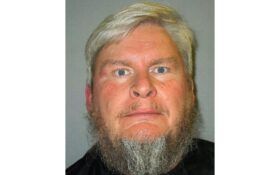 Authorities in Arizona say they have arrested a former Border Patrol agent suspected in a string of rapes going back more than two decades.

Mesa Police said Wednesday that 57-year-old John Daly III is a suspect in rapes that occurred from 1999-2001 in the Phoenix suburbs of Mesa, Gilbert and Chandler, as well as the city of Bisbee in southeastern Arizona.

Investigators say they were initially able to connect eight rapes through similar factors, but the case went cold for years. A new DNA technology recently connected Daly to crimes in Mesa and Gilbert.

Daly had a home in the various communities when and where each assault occurred.

He was arrested Tuesday in the southeastern Arizona city of Sierra Vista with the help of law enforcement agencies including U.S. Marshals and the FBI. The Border Patrol cooperated.

It was not immediately clear if Daly had an attorney to respond to the accusations. He was in the Cochise County Jail Wednesday morning and the Arizona courts website did not yet list a case against him.