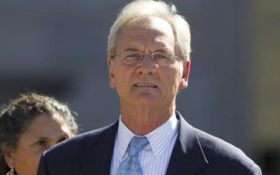 Former Alabama Gov. Don Siegelman was released Wednesday from a federal prison in Louisiana where he was serving a six-year sentence for bribery and obstruction of justice, a family spokesman said.

“As this dark and difficult time in his life comes to an end, Don Siegelman’s courage and grace and innocence shine through. We are overjoyed at the thought that we will have him back with us again. At a time of such unrest and uncertainty, the world will be a better place with Don Siegelman back in it,” Siegelman’s lawyer Gregory B. Craig said in a statement issued Wednesday morning.

A federal jury in 2006 convicted Siegelman on charges that he sold a seat on a state regulatory board to HealthSouth founder Richard Scrushy in exchange for $500,000 in donations to Siegelman’s signature political issue — his 1999 campaign to establish a state lottery. He was convicted on a separate obstruction of justice charge that he tried to hide money he received from a lobbyist.

Siegelman, who maintained his innocence, waged a lengthy battle in court, and in the media, to try to overturn his conviction. His lawyers argued his prosecution was politically motivated by Republicans upset by the Democrat’s political success and that the conviction was backed up by scant evidence.

Appellate courts upheld the convictions as Department of Justice attorneys argued the evidence was clear that Siegelman corruptly sold the board appointment after Scrushy — who initially supported another candidate for governor — agreed to contribute heavily to Siegelman’s signature political issue, starting a state lottery to fund education.

Siegelman for decades was a dominating figure in Alabama politics, holding the offices of secretary of state, attorney general, lieutenant governor and governor. He served as Alabama’s governor from 1999 to 2003. He was the last Democrat to hold the position in the deeply red state.

Siegelman’s longtime supporters cheered the release of the 70-year-old Democrat whom they had likened to a political prisoner, planning to wave signs to welcome him home as Siegelman was driven to the probation office in Birmingham to complete his release.

“Naturally, his family and many friends are very excited about his release and very much look forward to seeing him,” Hill said Monday.

Hill said Siegelman is expected to be on a “very restrictive supervised probation” for about six months.