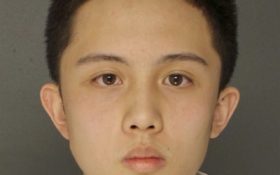 People who knew the 18-year-old Taiwanese exchange student charged in the U.S. with threatening to shoot up his school say he liked guns and flamethrowers and had dreams of a police career.

An Tso Sun, who has been jailed in the state of Pennsylvania, was “a child who really cares about things,” said Cheng Wei-ting, a tutor who home-schooled Sun in Taiwan’s capital, Taipei.

“He was an extremely simple and kind student, yet he would often have unusual ideas,” Cheng said.

“He planned to study in the same fields as Lee, such as criminal psychology and forensics,” Tuo said.

Sun’s case comes as school shootings in the United States, including the deaths this month of 17 students and teachers in Parkland, Florida, have triggered some of the biggest youth protests in recent years and calls for stronger gun control measures.

Sun threatened to commit a shooting on May 1 at the Monsignor Bonner and Archbishop Prendergast High School he attended, according to police in the Pennsylvania town of Upper Darby.

They said he had live ammunition, a military-style ballistic vest, ammunition clip pouches and a high-powered crossbow in the home where he was staying in the town of Lansdowne, and had researched how to buy weapons.

Sun later said his threat was only a joke, but he has been charged with making terroristic threats.

Defense attorney Enrique Latoison said Wednesday his client “had no intention or plans” to commit a school shooting and many items found were what he wore to school for a Halloween costume contest. He said his client said he was “Just kidding.”

Sun’s latest Facebook post, from October, shows a person dressed in army fatigues, headphones and a brown ski mask carrying what could be an automatic firearm.

A February 2017 post that was also his Facebook background cover photo shows orange flames being fired beside a cement wall and stairwells leading into a ravine.

An earlier Facebook post — one of several flamethrower images on the site — is the image of a book titled “How to Make A Flamethrower: The Do It Yourself Manual.” Sun made similar YouTube videos.

Sun once made a flamethrower as part of a school science fair, said Cheng, his former tutor. He thought “a day would come when zombies would appear,” she added. He had also devised an escape route from his home, she said.

“What I recall most is that when these school shootings happened in America, he would tell me that if he had been on the scene he would definitely be the first to protect his classmates, so he needs to have a strong physique,” said Cheng, who added that she once helped him research how to join a police SWAT team.

Sun’s parents, actor and assistant film director Sun Peng and actress Di Ying, could not be reached for comment. But Di told Taiwanese broadcaster Sanlih E-Television that her son was a “military affairs fan” who was “making a joke” about his school in the U.S.

Tuo, his father’s friend, told reporters he remembers Sun as “a very polite kid who had good grades, very disciplined and very kindhearted.”

“He lives in a family full of warmth, and his parents are very kind to him,” Tuo said. Regarding his arrest, he said, “I think it is a very, very big misunderstanding.”

Prior to that, he achieved average grades at the private Wego Elementary School in Taipei, where he was popular among peers and teachers and showed no interest in guns, academic director Liu Jen-hao said.

“So this matter (in the United States) we find rather surprising,” Liu said.

Sun was taken to Delaware County Prison in lieu of $100,000 bail. A preliminary hearing is scheduled for April 11.