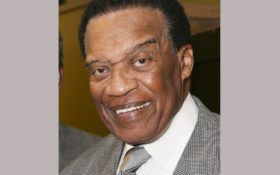 Bernie Casey, a professional football player turned poet, painter and actor known for parts in films such as “Revenge of the Nerds” and “I’m Gonna Git You Sucka,” has died. He was 78.

Born in West Virginia in 1939 and raised in Columbus, Ohio, Casey excelled in track and field and football and attended Bowling Green State University on an athletic scholarship.

He went on to play wide receiver for the San Francisco 49ers and Los Angeles Rams before going back to his alma mater to get a master’s degree in fine arts.

For Casey, the arts always came first. He painted and published books of poetry, but the football association that he viewed as a stepping stone followed him.

“It was just a gig,” he told the Washington Post in 1977 about football. “But it limits the way people perceive you. That can be frustrating. People have tremendous combinations of talents. A man can be a deep-sea diver and also make china.”

His art in particular captivated many famous minds, including Maya Angelou.

“His art makes my road less rocky, and my path less crooked,” Angelou said of a 2003 exhibit of his works.

He appeared in some 35 films, including “Boxcar Bertha,” ″The Man Who Fell to Earth,” ″Brian’s Song” and “Never Say Never Again.”

He also had a number of television credits including “Star Trek: Deep Space Nine,” ″Murder She Wrote” and “L.A. Law.”