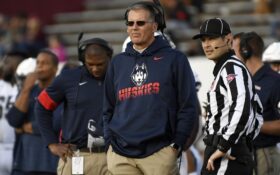 UConn canceled its 2020-2021 football season Wednesday, becoming the first FBS program to do so because of the coronavirus pandemic, after other schools had taken the Huskies off their schedules and the governor was reluctant to allow players to travel to states with high infection rates.

UConn had been scheduled to play its first season as an independent after leaving the American Athletic Conference.

The Huskies had already been taken off the schedules of Illinois, Indiana, Maine and Mississippi by those schools, and games against North Carolina and Virginia remained uncertain, UConn officials said. Many of the Power Five conferences are playing league-only games this season.

But coach Randy Edsall said the decision had nothing to do with UConn’s conference status.

The Huskies began spring practice on Feb. 4 and were one of the only teams in the country to complete a full spring schedule. The team returned to campus on July 1 and no one has tested positive for the coronavirus, UConn officials said.

But the team had several scares, with three players showing COVID-19 symptoms at various times this summer, requiring those players and everyone they had contact with to be isolated until those tests came back negative.

“In those three incidents, there was a total of 22 people and the average (isolation) time was 10 days,” Edsall said.

That meant that only 30% of the team was available for the 14 workouts the Huskies have had this summer, he said.

Senior left tackle Ryan Van Demark read a statement to the media from the team, which he said was united in its agreement to cancel the season.

“We love this game and we love competing,” he said. “We came to campus in the beginning of July knowing there would be challenges presented by the pandemic, but it is apparent to us now that these challenges are impossible to overcome.”

The football team will remain enrolled in classes either in-person or virtually, and will keep access to facilities and support services under NCAA rules.

Benedict said he is hopeful the NCAA will allow fall athletes an extra year of eligibility, as they did when spring sports were canceled.

He said UConn, which has rejoined the Big East for most other sports, has not made a final decision about any other program and is working with the conference, which is planning for league-only schedules for the fall.

“We have the same concerns for all of our student-athletes,” he said. “We will continue to monitor the situation. It is a big difference because, typically, as a conference you are trying to make that decision together. But, ultimately, at some point in time, we will absolutely make the decision that is in the best interest of our student-athletes.”

Connecticut Gov. Ned Lamont had expressed reluctance to allow the football team to travel to any state with a high virus infection rate. He said the team would be subject to the state’s 14-day quarantine rule upon its return to Storrs from away games.

Connecticut, New York and New Jersey have travel advisories that require visitors from 34 states and Puerto Rico to quarantine for 14 days, with certain exceptions.

UConn officials said they will be reaching out to season ticket holders in the coming days to explain refunds and other options.