Following her death, Aretha Franklin's music is climbing the charts - The Horn News 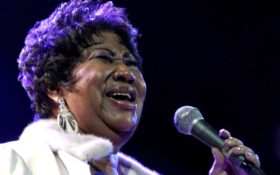 More songs from Franklin, including “(You Make Me Feel Like) A Natural Woman,” ″Think,” ″Chain of Fools” and “I Say a Little Prayer,” were in the Top 10.

The iTunes charts tracks digital sales and is updated multiple times each day.

Franklin died of pancreatic cancer at age 76. She had battled health issues in recent years and in 2017 announced her retirement from touring.