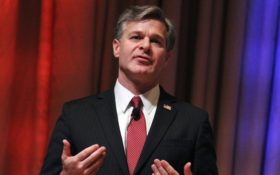 Christopher Wray faces a tough test four months into his leadership of the FBI: He must defend America’s top law enforcement agency against blistering attacks from President Donald Trump without putting his own job at risk.

The competing pressures Wray faces will be on display Thursday when he testifies before the House Judiciary Committee. Democrats may push him to respond forcefully to Trump’s weekend tweets calling the FBI a biased agency whose reputation is “in Tatters — worst in History!” and urging Wray to “clean house.”

Some Republicans will likely echo Trump’s concerns about what they see as political bias in special counsel Robert Mueller’s investigation of possible coordination between Trump’s campaign and Russia during the 2016 presidential election. Like Trump, they have seized on revelations that an FBI agent was removed from Mueller’s team because of anti-Trump text messages.

Wray’s start as FBI head would have been difficult enough, even without the intense scrutiny of the Russia investigation. Since he was sworn-in Aug. 2, the U.S. has had two of the deadliest shootings in its modern history and a terror attack in Manhattan.

Trump’s weekend tweets created a fresh dilemma for Wray. With his bosses, Attorney General Jeff Sessions and his deputy Rod Rosenstein, staying publicly silent, it fell to Wray to defend the agency. But FBI directors traditionally have been low-key and stoic — with Wray’s predecessor, James Comey, a notable exception. And Trump’s firing of Comey while he led the Russia probe shows the risk of antagonizing the president.

Wray’s defense, in an email to FBI employees this week, didn’t directly mention Trump’s comments, leaving some current and former officials wishing he had pushed back more forcefully.

Wray said he was “inspired by example after example of professionalism and dedication to justice demonstrated around the bureau” and urged agents to “keep focused on our critical mission” while constantly under a microscope.

For some agents still reeling from Trump’s firing of the popular Comey, the episode cut to the heart of their deepest concern: whether a Trump-appointed FBI director would be able to stand up to a president who routinely lashes out at law enforcement and has publicly lamented his inability to directly influence the agency’s affairs.

Wray repeatedly promised during his confirmation hearing that he could be independent, but “the jury is still out” on whether he has demonstrated that, said Frank Montoya Jr., a former senior FBI official who keeps in contact with agents still on the job.

“The absence of comment from the top, to us, has been really frustrating,” Montoya said. “On the inside, it’s like, why are we still a punching bag and nobody is counter-punching? A word of comfort or of calm or a sign of leadership would be appreciated at this time.”

Wray has stayed mostly under the radar in his first months on the job and has subtly tried to distance himself from Comey, who was widely criticized for publicly announcing that Hillary Clinton shouldn’t face criminal charges for her use of a private email server. Wray, for example, said he couldn’t imagine holding a news conference about someone who had not been charged, noting Justice Department policies against doing so.

Those close to Wray, a former high-ranking Justice Department official in the Bush administration, describe him as a steady hand whose low-key demeanor makes him well-suited to lead the FBI during a tumultuous time. He has seemed relaxed but reserved in his few public appearances. His memo Monday to employees ended with his favorite work-ethic maxim: “Keep calm and tackle hard.”

“In a society sometimes fixated to a fault on results, I am somebody who is a big believer in the importance of the integrity of process,” Wray said at the International Association of Chiefs of Police conference in October. “That’s part of how I am hoping to sort of steady the ship. By staying laser-focused on the mission and the work itself, day in and day out, left foot right foot, grinding away. Following the rules. Following the law. Trying to make sure we are doing the right thing, but in the right way.”

Tom O’Connor, president of the FBI Agents Association, said Wray has been supportive of agents’ concerns so far, meeting with the organization shortly after his confirmation.

“He has said that, in the four months since becoming director, he has learned more about, and is even more impressed with, agents’ work ethic and commitment to the bureau’s mission,” said O’Connor, who issued his own impassioned defense of the FBI after Trump’s attacks.

Others defended the agency as well, including Eric Holder, attorney general under President Barack Obama, who urged Justice Department leadership to speak out. Comey himself tweeted, “The FBI is honest. The FBI is strong. And the FBI is, and always will be, independent.”

But a retired FBI official said the bureau’s head needs to keep praise and support quiet and internal.

“If you’ve been there for 20-some years, you might not see attacks this high-profile, but you’re going to see attacks over and over and over on the organization,” said Robert Anderson, a former FBI executive assistant director. “The way to really beat that stuff is to dig in and do what you do best, and the agency is really going to shine.”