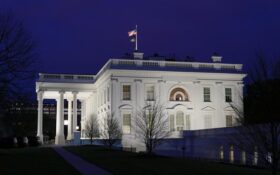 Is a former White House cabinet member about to be charged for voter fraud?

The North Carolina State Bureau of Investigation said it has submitted to prosecutors the findings of its voter fraud probe into former White House chief of staff Mark Meadows, who it says was simultaneously registered to vote in North Carolina and two other states earlier this year.

The State Bureau of Investigation announced Tuesday that it has turned over the case file detailing its investigation into Meadows’ North Carolina voter registration and listed residence to Attorney General Josh Stein’s office. Prosecutors with the attorney general’s office will determine whether criminal charges are appropriate, the bureau said in a statement.

Meadows, a former Republican North Carolina congressman who served in former President Donald Trump’s cabinet, was removed from the state’s voter rolls in April after Stein’s office asked the bureau to examine his voter registration records. He had listed a mobile home Scaly Mountain, North Carolina, that he never owned as his physical address weeks before casting an absentee by-mail ballot in the state for the 2020 presidential election. Trump won the Southern swing state that year by just over 1 percentage point.

A representative for Meadows did not immediately respond to a request for comment.

Public records indicate Meadows registered to vote in Alexandria, Virginia, in 2021, a year after he registered in North Carolina and just weeks before Virginia’s pivotal gubernatorial election in which Gov. Glenn Youngkin became the first Republican to win statewide office in a dozen years.

Meadows also registered to vote in South Carolina in March 2022 after he and his wife purchased a $1.6 million home on Lake Keowee, according to records for the address listed on their South Carolina voter registration forms.

Ironically, Meadows himself expressed suspicion of widespread voter fraud leading up to the 2020 general election. He repeated those controversial claims throughout the election cycle and in the aftermath of the race as Trump insisted the election was rife with fraud.

Stein’s office, which received the final case file from state investigators in November, declined to comment on prosecutors progress and whether they’d formerly file charges.