Flynn to plead the Fifth - The Horn News 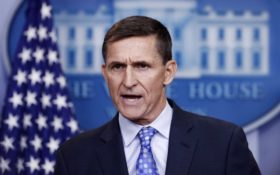 Flynn announced Monday that he will invoke his constitutional right against self-incrimination when he declines to hand over documents to a Senate panel investigating Russia’s meddling in the 2016 election, The Associated Press has learned.

Flynn is expected to cite Fifth Amendment protections in a letter Monday to the Senate intelligence committee, according to a person with direct knowledge of the matter. The person spoke on condition anonymity because they weren’t authorized to publicly discuss private interactions between Flynn and the committee.

The letter was expected to stress that Flynn invoking his constitutional protections was not an admission of wrongdoing but rather a response to the current political climate in which Democratic members of Congress are calling for his prosecution, the person said.

The letter does not fully close the door on Flynn’s future cooperation with the committee. Flynn’s attorney Robert Kelner said in March that Flynn wants to tell his story “should the circumstances permit.” At the time, Kelner noted it would be unreasonable for Flynn to agree to be questioned by the committee “without assurances against unfair prosecution.”

Flynn’s decision comes less than two weeks after the committee issued a subpoena for Flynn’s documents as part of its ongoing investigation into possible collusion between Russia and President Donald Trump’s 2016 presidential campaign.

Flynn’s decision was the second time he has declined requests for documents from the Senate committee. Flynn also turned down an April 28 request that was similar to ones received by other Trump associates, including former Trump campaign chairman Paul Manafort, Trump associate Roger Stone and former Trump foreign policy adviser Carter Page.

According to copies of letters sent to Page and Stone, the committee sought electronic and paper records involving any contacts between people associated with the Trump campaign and Russian officials and businesses. The request included emails, text messages, letters, phone records and financial information and documents.

Legal experts had said Flynn was unlikely to turn over the documents without immunity because doing so might compel him to waive some of his constitutional protections. Flynn has previously sought immunity from what he described as “unfair prosecution” to cooperate with the committee.

Flynn, a retired Army lieutenant general and former director of the Defense Intelligence Agency, was fired from his position as Trump’s national security adviser in February. Trump has said he fired Flynn because he misled senior administration officials, including the vice president, about his contacts with Russian officials including Sergey Kislyak, the Russian ambassador to the U.S.

As Flynn notified the Senate committee, members of key congressional committees are pledging a full public airing as to why former FBI Director James Comey was ousted amid an intensifying investigation into Russia’s interference with the U.S. election.

In Sunday show appearances, both Republican and Democratic lawmakers said they will press Comey in hearings as to whether he ever felt that Trump tried to interfere with his FBI work. Others are insisting on seeing any White House or FBI documents that detail conversations between the two, following a spate of news reports that Comey had kept careful records.

Comey was fired by Trump earlier this month. The former FBI director agreed to testify before the Senate intelligence committee after the Memorial Day holiday.