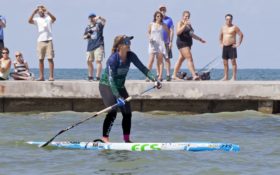 A Florida woman has completed a more than 100-mile voyage from Cuba to the Florida Keys on a standup paddleboard.

Victoria Burgess arrived in Key West on Wednesday, paddling across the Florida Straits in just under 28 hours.

Burgess is believed to be the first woman to make the trip from Cuba to the Keys on a standup paddleboard. The 34-year-old said that she wanted to set a record and serve to inspire others to accomplish their goals. She says she hopes to have the feat sanctioned by Guinness World Records.

Burgess is a Pompano Beach fire inspector, previously having served as a firefighter and paramedic.