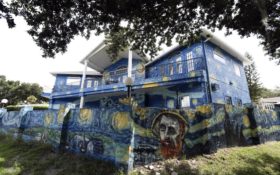 A Florida mayor apologized Wednesday to a couple fined thousands of dollars for having their home’s exterior painted to emulate Vincent van Gogh’s “The Starry Night.”

The Orlando Sentinel reports that the Mount Dora City Council unanimously agreed Tuesday that Lubomir Jastrzebski and Nancy Nemhauser can keep the blue-and-yellow paint swirled on their walls in the style of van Gogh’s masterpiece.

The settlement also requires the city to pay them $15,000 and remove a property lien to end the nearly yearlong code enforcement case.

Mayor Nick Girone publicly apologized to the couple Wednesday at city hall, adding that his city has a long history of supporting artists. Mount Dora, about 25 miles (40 kilometers) northwest of Orlando, hosts one of the largest art shows in central Florida.

“We are absolutely delighted and ecstatic,” Nemhauser said after Tuesday’s vote. “I’m unhappy that we had to go through all of this, but the ending is a happy ending.”

The dispute began when the couple painted an exterior wall as a way to calm their 25-year-old son, who is autistic and loves van Gogh’s work.

Code-enforcement officers cited the couple in July 2017, saying the murals violated Mount Dora’s sign ordinance and the house must be painted a solid color. The city also argued the bright colors distracted drivers.

The couple then had the rest of their home painted like van Gogh’s painting, attracting national attention.

The council also voted to create a seven-member advisory committee for implementing new ordinances or codes, and invited Nemhauser to be a member.

The “Starry Night” house will be exempt from any current or future ordinances so long as it keeps the murals in good condition. If they repaint, the homeowners lose their exemption.