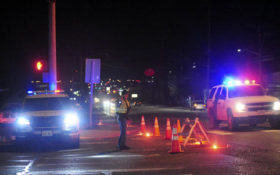 Florida authorities said they found cocaine and methamphetamine wrapped around a man’s penis during a traffic stop, but the man denied the drugs were his.

Pinellas County sheriff’s deputies said they stopped a vehicle driving without its lights on at 4 a.m. last Saturday. WFLA-TV reports the driver was arrested on charges of DUI and marijuana possession.

The man said the drugs were not his, but didn’t say who the drugs belonged to, according to the arrest report.