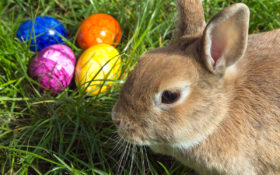 A Florida man who became a video sensation after fighting a man on the street while dressed as the Easter Bunny was arrested and tried to use the costume to elude capture, authorities said.

Antoine McDonald became an overnight phenomenon when a video captured him fighting a man on the streets of Orlando last year.

Earlier this month, McDonald was driving a motorcycle when he ran a stop sign and crashed into a carport before fleeing the scene, according to the Florida Highway Patrol. The carport collapsed on top of the vehicle.

Deputies went to McDonald’s address and spotted a gray car driving away and found McDonald laying in the backseat of the car.

When a deputy went to arrest him, he denied it.

“I wasn’t in any crash. I’m the Orlando Easter bunny, Google it,” he said, according to an arrest report.

The Orlando Sentinel reports authorities asked him to remove his costume before arresting him. He is charged with leaving the scene of a crash involving property damage, driving with a suspended license and operating a motorcycle without a license.