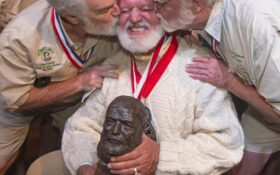 Some came in wool fisherman’s sweaters, and other contestants had sportsmen’s attire. But it was the cream-colored sweater of attorney Jon Auvil that caught the eye of judges who awarded him the title for most resembling author and former Key West resident Ernest Hemingway.

Auvil triumphed Saturday night over 124 other contestants for the title in the annual Hemingway Look-Alike Contest at Sloppy Joe’s Bar, the Key West establishment where the author was a regular patron during his decade-long residence on the island in the 1930s.

The look-a-like contest is a highlight of Key West’s annual Hemingway Days celebration, which ended Sunday.

Auvil said he shares Hemingway’s passion for fishing, has written some fiction and would like to do more writing.

“Every man wants to write like Hemingway,” said Auvil, who lives in Dade City, Florida, northeast of Tampa.

While living in Key West, Hemingway wrote classics, including “For Whom the Bell Tolls” and “To Have and Have Not.”