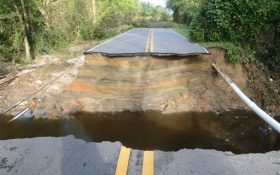 Evacuations were ordered for about one-tenth of Greenville’s 90,000 people. The Tar River continued to rise as forecasters expected it to crest above 25 feet by early Friday, a slight upward revision from previous estimates.

Authorities have closed one bridge across the swollen Tar and warned that multiple other bridges could close, isolating people on opposite sides. The city’s airport was expected to remain closed for another week due to flooding.

Elsewhere, flood conditions in Fayetteville were expected to last until Friday morning, while the Neuse River in Kinston was also still rising and expected to peak Saturday.

“We want you to evacuate these low-lying areas absolutely and immediately,” he told WITN-TV on Wednesday. “The time to get out is now.”

In a possible sign of storm-driven tensions, authorities said a state trooper shot and killed an armed man in Lumberton who became angry with officers carrying out search and rescue missions. They released little other information about the shooting.

In Greenville, military trucks rumbled through leafy neighborhoods where orange traffic cones and police tape discouraged people from entering. Police were stationed at the edge of the evacuation zone to monitor who came and went.

David Baker, whose family owns the River Bank Apartments, said all but one of their tenants had heeded the evacuation order by Tuesday, and he was spending the afternoon putting boards and sealant across the doorways of ground-floor units. A half-inch of water had already pooled in the parking lot, not far from where he stood.

“We’ve been back and forth all day buying pumps and supplies and stuff,” he said.

Matthew’s death toll in the U.S. climbed to 34, more than half of them in North Carolina, in addition to the more than 500 feared dead in Haiti.

In North Carolina, tens of thousands of people, some of them as much as 125 miles inland, have been warned to move to higher ground since the hurricane drenched the state.

Gov. Pat McCrory urged people to heed evacuation orders. Still, Greenville resident John Benson felt confident his house would be OK. His block didn’t take on water during Hurricane Floyd in 1999 and his street is on a steep grade, making a quick getaway possible.

“Police, fire people, came around, bull-horning and talking to us. They let everybody know to get out,” he said.

In the hard-hit town of Lumberton, along the bloated Lumber River, Ada Page spent two nights sleeping in a hard plastic folding chair at a shelter put together so hastily there were no cots. People had to use portable toilets outside.

“I left at home all my clothes, everything. The only thing I have is this child and what I was driving,” said Page, who was with an 8-year-old granddaughter.

The full extent of the disaster in North Carolina was still unclear, but it appeared that thousands of homes were damaged. Many likened Matthew to Hurricane Floyd, which did $3 billion in damage and destroyed 7,000 homes in North Carolina as it skirted the state’s coast in 1999.

East Carolina University in Greenville canceled classes for the rest of the week for its more than 28,000 students.

Travis Ambrose, a 23-year-old junior majoring in history education, said he and his roommates were passing the time by watching television and getting ahead on schoolwork. He and several other students walked within a few feet of where the brown water was approaching an apartment building. He said the river’s banks are normally more than 100 yards away, hidden behind a tree line.

“If you’re not used to this kind of stuff you’re going to see this and panic,” he said. “To me, it’s like, you have a bit of tension in the back of your head but you realize it’s going to be all right.”