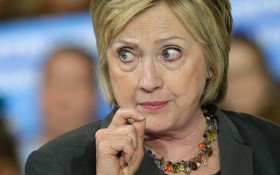 This resurfaced tape threatens to not only expose her cozy ties to overseas regimes, but could also undermine all the accusations of so-called collusion her bitter followers keep throwing at President Donald Trump.

This footage shows Clinton candidly talking about her dealings with foreign leaders, but these aren’t official on-the-record chats from when she was a senator or secretary of state.

In this footage, she ADMITS to having secret off-the-record conversations with these foreign leaders WHILE she was running for president of the United States, and that they SPOKE about the campaign!

“I am already receiving messages from leaders,” she boasted in March 2016, long before she even secured her party’s nomination. “I’m having foreign leaders ask if they can endorse me to stop Donald Trump.”

She made these comments publicly, during a CNN Town Hall debate with Bernie Sanders.

When pressed who was contacting her privately, however, she got cute and laughed.

Was it an empty boast? A flat-out lie? Or was it the truth – and that laugh at the end coming when she realized she said too much?

It’s hard to say with Clinton, but one thing is certain: If a tape of Trump surfaced saying the same thing in private that Clinton said in public, the left-wing media would no doubt be calling for his impeachment.

Even if it weren’t Trump himself – just someone remotely linked to his campaign – the cries of collusion would dominate the front pages, TV newscasts and liberal media websites.

It seems the media needs to make a choice on how it covers “collusion.”

Either some degree of foreign contact is normal and maybe even necessary when campaigning for president of the United States, a job that is not only the leader of our nation but in many ways the leader of the world.

Or it’s not and needs to be investigated and exposed – and if it’s the latter, then Clinton needs to come under the microscope immediately.

After all, there’s already evidence that she and the Democratic Party may have coordinated with foreign nationals in ways that are at the very least unethical and quite possibly illegal.

While she never named the countries that may have been reaching out to her, at the time she made that statement – March 2016 – Ukraine was in the headlines over its war with Russian-backed separatists.

As it was later revealed, a Ukrainian-American activist who was on the Democratic payroll was meeting that very same month in the Ukrainian embassy with the ambassador and an aide.

According to Politico, that may have led to an effort by Ukrainians to help the Democrats dig up dirt on Paul Manafort when he was Trump’s campaign manager… including the accusations that ultimately cost him his job.

“If everyone is running around with the assumption that it’s illegitimate to work with a foreign government in a campaign, then it’s perfectly fair to ask what was the relationship between the Clinton campaign and the Ukrainians,” Benjamin Wittes, editor of the LawFare blog and no friend of the Trump administration, told PolitiFact.

It seems the time to ask is right now.