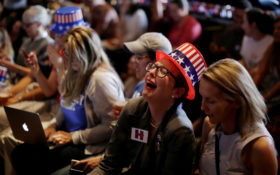 Super-sensitive liberal college students have yet to find a protest they don’t like.

With an ever-expanding list of offenses that upset these liberal crybabies, 2018 was an epic year for snowflake meltdowns.

University of Wisconsin students staged a sit-in to protest the school’s cutting of humanities majors like philosophy and art, in favor of more marketable careers like information technology and engineering.

Students’ protest was based on the infinite wisdom that “freedom to pursue their dreams” is more important than closing WU’s $4.5 million budget deficit.

TURN YOUR BACK ON RACISM

Labor workers don’t make a lot of money because their bosses are enormous genderphobes… not because workers’ income is commensurate with their education and skills.

A Cornell University senior stripped Letitia Chai and 28 of her classmates stripped down to their skivvies during her thesis presentation to protest her professor’s moral judgment of her attire. The previous week, during a test run of her thesis presentation, Chai’s professor dared to suggest that cut off shorts may not be appropriate, as it could distract from her content.

Offended by this moral judgment or her attire, Chai really “showed them!” She later proudly professed her mom is a feminist, gender and sexuality studies professor. We are all shocked!

SIT IN FOR MULTICULTURALISM

More than 100 black students at Centre College staged a sit-in to address critical educational needs specific to students of color that were being ignored.

Among the list of demands: Centre declares itself a “sanctuary campus” for all DACA students, the creation of a “temporary multicultural space”, providing a wider variety of food in the college’s dining hall “to accommodate cultural and religious dietary restrictions;” and accurate labeling of “cultural dishes” in the dining hall.

Last but not least we have Evergreen State College, where an annual “Day of Absence” is held. An absence of whom?

White people of course, whose very presence is obvious oppression to all people of color. Last year, biology professor Bret Weinstein refused to participate based on “insane notion” that excluding people based on skin color is racist – even if that skin color is white.

Weinstein and his wife faced numerous verbal and physical threats as a result of their position. The couple sued Evergreen and were forced to resign in exchange for a $500,000 settlement.

These future social justice warriors are on a crash course to the destruction of the very institutions of higher education they claim to defend.

— Melanie T. Collette is a reporter for The Horn News and host of the “MoneyTalk with Melanie” show. She is an outspoken conservative with a passion for small government and finance.