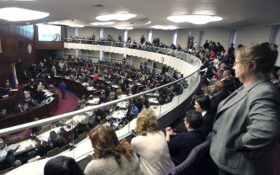 Nevada became the first state in the U.S. with an overall female majority in the Legislature on Tuesday when county officials in Las Vegas appointed two women to fill vacancies in the state Assembly.

The appointments of Democrats Rochelle Thuy Nguyen and Beatrice “Bea” Angela Duran to two Las Vegas-area legislative seats give women 51 percent of the 63 seats in the Legislature.

No state has previously had a female-majority or even a 50 percent-female Legislature, according to the Center for American Women and Politics at Rutgers University, which tracks women’s political representation.

Women picked up seats in the Nevada Assembly and Senate during the 2018 November election but fell short of an overall majority. Vacancies created by lawmakers who won election to other offices in November, along with one sitting female lawmaker then allowed women to gain additional seats.

With the 2018 election, women cracked the 50 percent threshold in the Nevada state Assembly and Colorado State House, but no overall majority was reached until the Nevada appointments.

“It is unprecedented at this point to see a majority female legislature overall,” said Kelly Dittmar, an assistant professor of political science at Rutgers-Camden.

With the two Nevada appointments, women will make up 28.6 percent of state legislators nationwide when new legislators are sworn into office in 2019, according to data from the Center for American Women and Politics.

Women made up 24.3 percent of state legislators in the U.S. a decade ago, the center said.

Studies of women who have served in Congress are probably comparable to female gains in state legislatures, she said, and the studies have found that “the more women you have in the body, the more that their perspectives and life experiences are integrated into policy debates and deliberations.”

Dittmar said the milestone in Nevada could help change attitudes of what a state Legislature should like.

Nguyen, an attorney, and Duran, a grievance specialist with the state’s casino workers union, will hold their seats until the next general election in 2020.

“It’s a great victory,” Duran told The Associated Press in a telephone interview. “Women are proving to have more knowledge and aren’t afraid to show that power that they have.”

Duran has been a staff member since 1999 at the powerful Culinary Workers Union Local 226, a key political organization in the state.

“When women do better, I think families are stronger,” Nguyen said.

“It’s high time that they be at the table,” Speaker of the Assembly Jason Frierson told the AP. “This is a reflection of a trend of making sure that that voice is heard.”