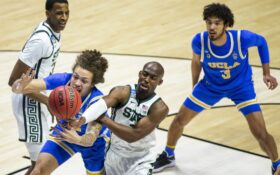 Who are we kidding? “First Four” still sounds more like an educational toy than the prelude to three of the best weeks in sport.

But because of the pandemic, it’s been 710 days since last we saw the NCAA Tournament — who’s counting? — so let’s not quibble over names and go straight to the opening-night review:

The first four games were grafted onto the 64-team main bracket in 2011, naturally, to pad the NCAA coffers. They were originally dubbed “play-in” games, and then briefly the “First Round,” which the NCAA quickly squashed to avoid any confusion with the 16 games that begin the tournament in earnest Friday.

Only one First Four team has also made it all the way to the Final Four — Virginia Commonwealth in 2011 — but survivors tend to punch above their weight. Four teams have made it to the Sweet 16 and 2019 marked the only year at least one of the first four survivors failed to win a game in the big-boy bracket.

Michigan State’s brief appearance in the tournament was coach Tom Izzo’s 23rd straight, but it was small consolation. He got into a heated exchange with one of his own players — and not for the first time — after what appeared to be a defensive miscommunication on the final play of the first half. When Gabe Brown turned away, Izzo grabbed his arm and then the back of his jersey.

“It was a normal nothing. But in this day and age, everything’s got to be something,” Izzo groaned, then added. “It was over a missed switch that we talked about.”

The Spartans promptly went on to hand back the double-digit lead they held at intermission, yet still led by six points with four minutes left. Then the house fell in. The Bruins Jaime Jaquez Jr., who finished with 27 points, banged in a layup and added the game-tying free throw in regulation. Johnny Juzang hit back-to-back baskets to begin the extra period and UCLA kept its nose in front the rest of the way.

The reward for winning the clash of No. 11 seeds is a short drive to Hinkle Fieldhouse in Indianapolis, where the Bruins will face No. 6 Brigham Young.

Drake’s win was a long time coming — 50 years to be exact — and didn’t go into the books until a last-second 3-point try by Wichita State’s Alterique Gilbert clanged off the front rim. An early dunk by the Bulldogs 6-foot guard Joseph Yesufu over the Shockers 6-7 Clarence Jackson produced the tournament’s first sure-fire poster. But Drake had to erase a double-digit, second-half deficit in a battle of No. 11 seeds and then hold its breath until the final buzzer.

“It’s been a long time coming and our guys knew that,” said Bulldogs coach Darian DeVries, whose eight-year contract extension, signed just a day earlier, is already paying dividends. Good thing, too, because he’ll draw No. 6 USC in the main bracket.

Texas Southern simply had too much pace for a deliberate Mount St. Mary’s squad in a match of No. 16 seeds. TSU coach Johnny Jones took advantage of the sport’s more equitable transfer rules to quickly build an up-tempo attack. He sweet-talked eight talented kids from other programs onto campus, including John Walker III, who had a season-high 19 points and nine rebounds. The win was the Tigers’ 10th straight.

“I feel like I’m on top of the world,” Walker, who was previously at Texas A&M, shouted afterward.

But maybe not for long.

Texas Southern faces East Region top seed Michigan on Saturday. Jones won’t have long to prepare a game plan, but he planned to savor the win, which his players celebrated by emptying a water cooler over his head.

“They drenched me,” Jones laughed, “but I’ll tell you what: It’s one of the best feelings I’ve had in cold water in a long time.”

Norfolk State won the other battle of No. 16s, but did so drenched in sweat. The Spartans built a big first-half lead, squandered it and then some in the second and had to close with a 9-2 run — capped by Devante Carter’s free throws with 8.6 seconds left — to prevail.

“We knew what was on the line. Nobody wants to go home. They told me that the flight was leaving tomorrow at 9:30 (am),” Norfolk State coach Robert Jones said. “I told them I’m not packing.”

Jones better not put the suitcase too far out of reach. The Spartans’ reward is a chance to burnish their giant-killer reputation against the overall No. 1 seed this year — Godzilla … er, Gonzaga.