The first Clinton insider to fall... - The Horn News 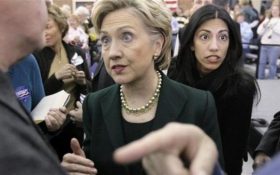 There’s a new call to “LOCK HER UP!” and this one isn’t just aimed at failed presidential candidate Hillary Clinton.

A bombshell new report exposes a dangerous security breach caused by her top aide during her term as secretary of state.

Huma Abedin – at the time married to convicted pedophile Anthony Weiner – sent highly sensitive and confidential information from secure government servers to just about the most insecure place possible.

One of the emails obtained by Judicial Watch even warned it was “Not for circulation.”

But it got circulated anyway, from Clinton to Abedin to Abedin’s Yahoo account and then who knows where else after that, and that’s hardly the worst of the data being shipped out of secure government servers.

The emails also included government passwords and information so sensitive it STILL can’t be publicly released despite a Judicial Watch lawsuit, according to an analysis published by The Daily Caller.

But while the American public can’t have access to that confidential intelligence, others likely do.

Yahoo was the scene of some of the world’s most notorious data breaches. In October, the company admitted that every single account… all 3 BILLION of them… were compromised in a massive data breach.

It’s not clear who was responsible for the attack.

But a separate cyberattack on Yahoo in 2012 that exposed nearly 500 million accounts was linked to two Russian spies and two hackers, according to the U.S. Department of Justice.

Those attacks took place AFTER Clinton’s disastrous turn at the State Department.

That means Abedin’s emails – including everything she forwarded from the State Department, right down to those government passwords – could right now be in the hands of hackers… terrorists… foreign governments… and sworn enemies.

The behavior is downright reckless: Abedin sent a set of highly sensitive emails to her Yahoo account in 2012 just FIVE DAYS after CNN reported that 450,000 Yahoo passwords were compromised, according to the Daily Caller.

Abedin – and Clinton – got a free pass under President Barack Obama.

No data breach was too large to be ignored, even though former FBI director James Comey noted that the agency believed “hostile actors gained access to the private commercial e-mail accounts of people with whom Secretary Clinton was in regular contact from her personal account.”

It’s not clear if Abedin is one of those people.

But one thing is clear: The current commander-in-chief takes his job ensuring the safety and security of all Americans much more seriously.

Trump was referring to U.S. Navy sailor Kristian Saucier, who served a year in prison for taking six photos inside classified areas of the USS Alexandria, a submarine.

Warning: Don’t swallow one more milligram of THIS drug [sponsored]
He’s now hoping for a pardon.

“I mishandled low-level class information and they went after me with the full weight of the government,” he told Fox News. “Hillary Clinton and Huma Abedin flagrantly mishandled high-level information, making it available to a pedophile, and they get away with it.”

Indeed, Clinton and her cronies continue to get off the hook for what they defend as mere “carelessness” but in reality is in violation of every possible security protocol imaginable.

Saucier is calling for an end to this ugly double-standard.

“(Abedin) should be put through the same legal system that went after me, and unfortunately I didn’t have near the legal resources that she does or Hillary Clinton does, so they’ll be able to mount a much better defense than I could,” he said. “But even still, they should be charged the same as me.”

Clinton and Abedin are rapidly running out of friends in Washington. The clock toward indictments might finally be ticking down.