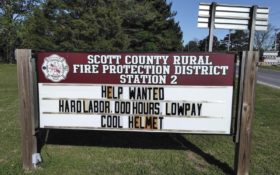 A Missouri county trying to recruit new firefighters is getting real with its sales pitch, saying in signs posted outside its stations that the job offers “Hard Labor, Odd Hours, Low Pay (and) Cool Helmet.”

KFVS-TV reports that the Scott County Rural Fire Protection District’s chief, Jeremy Perrien, says most advertisements are “kind of boring.” He says that’s why they “wanted to add some humor to it” and “try to catch people’s attention.” The fire district posted a picture of the help wanted message on its Facebook page this week.

Perrien says they’re short about 15 firefighters, and rarely have a full staff. The recruitment ad comes amid a shortage of volunteer firefighters in the Heartland.