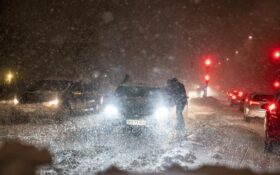 A training session on water rescues turned real for firefighters in suburban St. Louis when the crews sprang into action to save two teenagers.

Maryland Heights Fire Protection District crews were wrapping up training Tuesday on Creve Coeur Lake when they spotted two people running across it, the St. Louis Post-Dispatch reported. As they watched, the ice covering the lake broke and the pair fell through.

The training firefighters, along with Pattonville and Creve Coeur firefighters, quickly scrambled to pull the two teens to safety from the icy lake within minutes.

Read more: Super Bowl ads to look toward the future… and the past