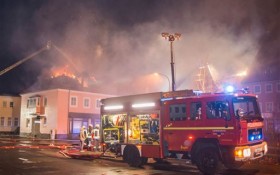 Firefighters helped one of their own pull off a marriage proposal.

Fayetteville, North Carolina, firefighter Ashton Hanway asked Lauren Wood to visit Station 17 on Friday to take some pictures. His captain suggested they stand on top of a truck.

An alarm sounded and two firefighters got into an adjacent truck. When they pulled out, they revealed a fire hose on the floor that spelled out: “Will you marry me?”

Hanway tells The Fayetteville Observer he was trying to write in cursive and it took several hours to do everything.

Wood, who said yes, says it was a complete shock. She described it as an “out-of-body experience.”

The couple, who have been together for six years, are planning a 2019 wedding.