Fiona the hippo becomes an educational force - The Horn News 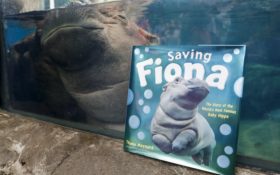 The Cincinnati Zoo’s famous premature baby hippo does more than delight social media fans and help sell a wide range of merchandise. She’s also an educational and literary force, heroine of a half-dozen books so far and a popular subject for library and classroom activities.

“She has taught us a lot,” Maynard said. It’s believed Fiona is the smallest hippo ever to survive. Born nearly two months early, she was 29 pounds (13 kilograms), a third the size of a typical full-term Nile hippo and unable to stand or nurse.

A zoo staffer hand-milked her mother Bibi, and Smithsonian’s National Zoo in Washington helped develop a special formula. Nurses from Cincinnati Children’s Hospital were enlisted to put in a hippo IV.

“We were a nervous wreck every day,” Maynard said of Fiona’s first six months after her birth in January 2017.

His book is aimed at young readers, telling Fiona’s against-the-odds story while loading in facts about hippos, such as that they can outrun humans and are herbivores that can be dangerous because of their size of up to 5,000 pounds (2,270 kilograms).

“Part of the zoo’s mission is public education,” Maynard said. “(The book) is reaching kids and families with a message of hope … never giving up.”

The combined Fiona library of books by various authors and illustrators has sold tens of thousands so far.

Educators say students are attracted to lessons themed around animals.

Fiona has been on the cover of three Scholastic Classroom Magazines that reached millions of students with stories accompanied by reading exercises or math formulas such as finding how many bathtubs the water in her zoo would fill.

“Everybody just falls in love with her,” said Stephanie Smith, editorial director for Scholastic News grades 3-6. “Kids will just gobble it up. It makes teaching easy.”

“There is a deeper message to be conveyed,” he said.

However, Shriberg, who said growing up in Cincinnati as a frequent zoo visitor helped lead him into wildlife conservation, said the Fiona mania — which has seen her image marketed on items from playing cards to beer — is a positive development overall.

“We are certainly in favor of anything that is engaging people with wildlife, and Fiona has been a phenomenal success,” he said. “You’ve got the American public and people around the world really caring about hippos and animals, through the lens of Fiona.”