Finally a little good news for Biden? - The Horn News 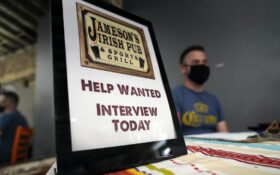 Since taking office, President Joe Biden has been hit by a score of international and domestic crises — and he has sagged in the polls over criticism of his hamfisted responses. One year in, he remains unpopular.

But on Friday, the White House finally got a sliver of good news.

In a surprising burst of hiring, America’s employers added a robust 467,000 jobs last month, a sign of the economy’s resilience in the face of a deadly wave of omicron infections.

The government’s report Friday also drastically revised up its estimate of job gains for November and December by a combined 709,000. It also said the unemployment rate ticked up from 3.9% to a still-low 4%, mainly because more people began looking for work and not all of them found jobs right away.

The strong hiring growth for January, which defied expectations for only a slight gain, demonstrated the eagerness of many employers to hire even as the pandemic raged. Businesses appear to have regarded the omicron wave as having, at most, a temporary impact on the economy and remain confident about their longer-term prospects.

How much of that is actually attributed to Biden’s policies — and how much is the economy naturally recovering from several months’ worth of lockdowns — remains to be seen.

“Employers have assumed that omicron would be painful but short term, so they haven’t changed their hiring plans,” said Mathieu Stevenson, the CEO of Snagajob, a job listings site focused on hourly workers. “Demand from employers is as strong as ever.”

January’s hiring gain and sharp upward revisions to previous months mean that the United States has 1.1 million more jobs than government data had indicated only a month ago.

The solid hiring numbers are boosting consumer spending, which has collided with snarled supply chains to accelerate inflation to a four-decade high.

Adjusted for price increases, Americans’ paychecks on average don’t go as far as they did a year ago, even though many workers have received raises. Many households, especially lower-income families, are struggling to afford necessities like gas, food, rent, and child care.

Those trends will give the Federal Reserve more leeway to raise interest rates, perhaps even faster than it had planned, to cool inflation. The Fed has indicated that it will begin raising rates in March, and it could do so again at its next meeting in May. Faster rate hikes could reduce borrowing and spending and possibly weaken the economy.

Stocks initially fell on the expectation that the Fed will tighten credit more quickly, before share prices recovered in early afternoon. But the yield on the 10-year Treasury jumped nearly one-tenth of a percentage point, to 1.91%, a sign that investors anticipate higher borrowing costs.

Across the economy, most industries hired workers last month, including retailers, which added more than 61,000 jobs, and restaurants and hotels, which gained 131,000. Shipping and warehousing firms added 54,000. Many companies in those industries likely held onto some of the workers they had hired over the winter holidays, economists said, rather than laying them all off.

Omicron did leave some fingerprints on the report: The percentage of Americans who were working from home rose to more than 15%, up from 11% in December. And the number of people out sick last month soared to 3.6 million, up from fewer than 2 million in the previous January and about triple the pre-pandemic level. This forced many companies, from restaurants to retailers to manufacturers, to reduce their hours or even close because of staff shortages.

Among the workers who were out sick was Perla Hernandez, whose entire family of eight contracted COVID last month. Hernandez and her husband and 20-year old daughter all missed work, a major blow to the family’s finances.

Hernandez, 42, who lives in the San Jose, California, area, missed six days from her job as a Burger King cook and janitor. Because she has no paid sick leave, the paycheck she receives every two weeks amounted to just $230.

About one-fifth of U.S. workers receive no sick pay, and the proportion is far higher among lower-paid service workers. Only 33% of workers who are at the bottom 10% of the pay scale receive paid sick leave, compared with 95% of employees in the top 10%.

“Thank God that we already had paid the rent for January,” she said through an interpreter. “We had to go to a food bank.”

Hernandez said she earns $15.45 an hour, after having received a 45-cent raise six months ago. But she and her colleagues, including managers, have been working especially long hours because the restaurant has had difficulty hiring.

Daniel Zhao, a senior economist at the employment website Glassdoor, said the healthy hiring — not only for January but also for November and December — is a sign that last month’s gains weren’t merely a blip.

“This is an actual trend, and job growth was faster than we realized,” Zhao said.

A greater proportion of Americans are also now working or looking for work, the report showed, a trend that makes it easier for companies to find workers. It suggests that concerns about long-term labor shortages may have been overblown, at least in some industries.

“There are workers out there — it’s just taking time to integrate them back into the labor force,” Zhao said.

Grady Cope, the CEO of Reata Engineering and Machine Works, said nine of his 43 staffers were out sick last month — the most he can remember in nearly 30 years of running the company.

But Cope’s company, which makes parts for airplane and medical device manufacturers, also has the biggest order backlog it’s ever had. He wants to add at least eight employees, including machinists, assemblers and engineers. Last month, he raised pay 18%, far more than the usual 3%-4% increases. His company is based near Denver, where rents and other costs are rising fast.

“People have to have wages so they can support themselves and raise families,” he said.

Still, Cope has been increasing his own prices to offset his workers’ higher pay. The competition for workers, he said, is the toughest he’s ever seen. In October, four of his workers quit. Only one gave notice.

The overall outlook for the job market remains bright, with openings near a record high, the pace of layoffs down and the unemployment rate having already reached a healthy level.

The nation gained more jobs last year, adjusted for the size of the workforce, than in any year since 1978.

Much of that improvement represented a simple reversal from record job losses in 2020 that was driven by the pandemic recession and closures.