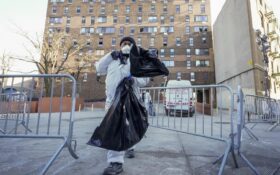 A 2-year-old boy was among the 17 people killed in a Bronx high-rise apartment building fire, police confirmed Wednesday.

The eight children who died in the fire range in age from 2 to 12. The oldest among the victims was a 50-year-old woman.

Many of the victims are immigrants from the same area of Gambia and several families suffered multiple deaths. Five members of one family died while trying to escape through the smoke from a high floor.

At least a dozen of those who perished worshipped at the Masjid-Ur-Rahmah mosque. Funeral services are expected in the next several days.

The fire broke out in a third-floor apartment and only spread as far as one adjacent hallway, but suffocating smoke spread throughout the building when a spring-loaded door failed to close behind the tenants fleeing the burning unit.

All of the people who died were killed by smoke.