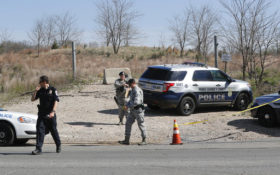 The military says a fighter jet pilot on a training mission ejected safely before the aircraft crashed a few miles from the U.S. capital.

Air Force officials said in a statement Wednesday that the D.C. Air National Guard F-16C was flying with other aircraft when it crashed in a wooded area in Clinton, a Washington suburb that’s about 6 miles (nearly 10 kilometers) southwest of Joint Base Andrews.

Officials say the pilot, the only person on board, sustained injuries that aren’t thought to be life-threatening.

Prince George’s County fire department spokesman Mark Brady tells WRC-TV that a pilot parachuted out of the aircraft and was picked up by a military helicopter. Brady says homes in the area are being evacuated. There are no other reports of injuries.