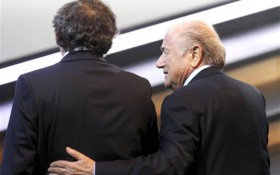 Soccer is the world’s biggest sport and is watched by billions of fans, and a huge corruption scandal has rocked it from the top. FIFA, the world governing body of soccer that runs events like the World Cup, has provisionally banned President Sepp Blatter and UEFA President Michel Platini for 90 days in the wake of a Swiss criminal investigation.

The move by the FIFA ethics committee further taints Blatter’s 40-year career at FIFA, including 17 years as president. It also damages the hopes of Platini to replace Blatter in a February election.

Swiss authorities turned up at Blatter’s office at FIFA headquarters last month and interrogated him. The criminal case centers on Blatter allegedly misusing FIFA money by making a $2 million payment to Platini, who was questioned as a witness.

Blatter was also questioned by Swiss investigators about broadcasting contracts sold to former FIFA vice president Jack Warner in 2005 that were supposedly undervalued.