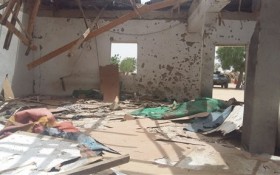 Two female suicide bombers killed at least 24 worshippers and wounded 18 in an attack during dawn prayers Wednesday on a mosque on the outskirts of the northeast Nigerian city of Maiduguri, officials said from the birthplace of Boko Haram.

One bomber blew up inside the mosque and the second waited outside to detonate as survivors tried to escape, said coordinator Abba Aji of the civilian self-defense Vigilante Group.

Those injured totaled 18. An earlier AP toll of 23 injured had double-counted those rescued.

President Muhammadu Buhari sent condolences to families of victims, said the attack exposed the perpetrators as “mere criminals who have no place among civilized people,” and promised that “the final end of Boko Haram is in sight.”

It was the second attack in five months on the Molai-Umarari mosque. Twin suicide bombers in October killed six people.

“Do you know that among those in the mosque, only the chief imam survived” on Wednesday, said resident Adam Modu. The second bomber had her back to a child when she exploded, blowing the kid into pieces, he said.

The mosque was closed after the October attack and had only reopened three days ago, residents said.

Umar Usman said he escaped because he was late: “We were just a few meters away from the mosque when a loud bang erupted and all we could see was dark smoke and bodies littered around.”

The mosque is on the outskirts of Maiduguri, the city that is the military command center of the war against Boko Haram.