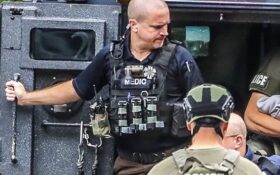 Federal investigators said Wednesday they have seized 81 vehicles worth an estimated $3.2 million that were bound for Venezuela as part of a smuggling ring operated for wealthy and politically-connected people.

Anthony Salisbury, chief of the Miami Homeland Security Investigations office, said the vehicles were to be smuggled in violation of U.S. export laws and sanctions against the socialist Venezuelan government.

According to Salisbury, many of the vehicles are linked to Venezuelans already facing indictments in the U.S., including billionaire Raul Gorrin. Gorrin is a government-connected media magnate wanted in the U.S. for allegedly masterminding a graft network that stole $2.4 billion from state coffers through fraudulent currency deals with Venezuela’s oil monopoly.

Gorrín did not immediately respond to a request for comment.

A former resident of Miami, Gorrin was involved last year in a furtive effort to bridge differences with the Trump administration by brokering a potential soft exit for Venezuelan President Nicolas Maduro in exchange for sanctions relief. As part of the effort, he traveled to Washington and managed to get his photo taken shaking hands with Vice President Mike Pence.

No charges have been brought in relation to the seized vehicles, which were on display Wednesday at Port Everglades in Fort Lauderdale. Many of them are equipped with police packages, such as flashing lights and sirens, officials said.

Salisbury said the overall scheme is much larger, calling the seized vehicles “the tip of the iceberg, or a drop in the bucket for what we’ve started to identify for this illegal exploitation scam.”

Since 2017, Salisbury said HSI and federal prosecutors have seized more than $450 million in bank accounts as well as yachts, luxury properties, horses and other assets linked to Venezuelans charged with money-laundering in the U.S. and elsewhere.