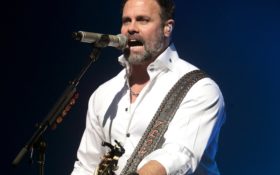 Pilot error following engine maintenance problems caused the helicopter crash that killed Montgomery Gentry singer Troy Gentry and the pilot at a small airport where he was to perform that night, federal investigators said.

The pilot cut the engine too soon as he tried an emergency landing, leading to an uncontrolled descent, the National Transportation Safety Board said in a final report.

Instead of reaching the runway at the Flying W Airport in Medford, New Jersey, the helicopter crashed in woods nearby.

Gentry, 50, who was half of the award-winning country music duo Montgomery Gentry, was taking a pleasure and orientation flight before the concert at the airport’s resort. The other half of the duo, Eddie Montgomery, and other band members were at the airport at the time.

Several minutes after takeoff, pilot James Evan Robinson told experts on the ground that he couldn’t control the engine. They suggested a shallow, run-on landing, but he instead said he planned to cut the engine and try to glide in, a maneuver he said he had done before, the report said.

The experts stressed the need to wait until he was over the runway to turn off the engine, but investigators found he instead did so a quarter- to half-mile out. The NTSB said the maintenance crew’s failure to rig the throttle control assembly before the flight contributed to the crash.

Gentry was born in Lexington, Kentucky, where he met Montgomery.

Montgomery Gentry had success on the country charts and country radio in the 2000s, scoring No. 1 hits that included “Roll With Me” and “Back When I Knew It All.” Some of their songs even cracked the Top 40 pop charts.

The band mixed country music with Southern rock. It was inducted into the Grand Ole Opry in 2009. It released its debut album, “Tattoos & Scars,” in 1999.