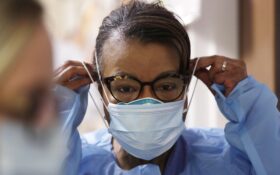 The federal government has seized $3.6 million from the bank account of a company involved in a deal to sell $4.5 million in overpriced, counterfeit N95 masks to the state of Maine.

The U.S. attorney is seeking to force the company, Med-Tech Resource LLC of Eugene, Oregon, to forfeit the money and reimburse the state for 1.8 million fake respirators purchased by the state. But the company’s CEO already agreed to refund the state, the Portland Press Herald reported.

“We’ll do everything in our power to make everyone whole,” said Michael Modrich, founder and CEO of the 30-year-old medical supply company.

Donald Clark, acting U.S. attorney for Maine, declined to comment on the case Monday, including whether criminal charges will be brought.

Homeland Securities Investigations began looking into the matter in February, around the time a National Recall Alert Center notified Maine that the state had purchased masks that might be counterfeit, according to a forfeiture claim filed on Friday.

3M, which manufactures the real N95 masks, later confirmed the masks were counterfeit. The money was seized in March, according to court documents.

In other pandemic news in Maine:

The AP is using data collected by Johns Hopkins University Center for Systems Science and Engineering to measure outbreak caseloads and deaths across the United States.

The Maine Center for Disease Control and Prevention said Tuesday that the total number of positive cases of the virus in the state since the start of the pandemic is more than 66,000. There have also been 805 deaths, the agency reported.

More than half the state’s population has now had at least a first dose of coronavirus vaccine.