FedEx delivery man flings package over fence, what happens next is tragic... - The Horn News 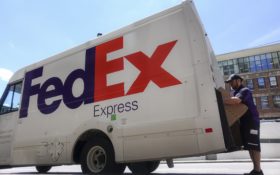 FedEx says it’s investigating after a Los Angeles couple said a package flung over a fence into their yard injured their dog so badly he had to be euthanized.

Keiko Napier and Mitchell Galin tell KCBS-TV that their 4-pound Yorkshire terrier, Cooper, was sunbathing in their Venice backyard Saturday when a FedEx driver tossed the package, which contained crystal and a Christmas present.

Galin says the heavy package landed on the dog, leaving him in a puddle of blood.

The animal had lung and liver damage and the couple chose to euthanize him.

FedEx says it will investigate and take appropriate action.

Napier says her grandchild and mother sometimes use the yard and the package could have struck and injured them. She wants FedEx to ban drivers from throwing packages.