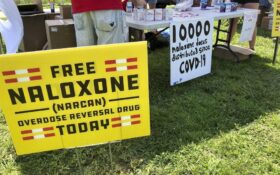 A federal judge on Monday ruled in favor of three major U.S. drug distributors in a landmark lawsuit that accused them of causing a health crisis by distributing 81 million pills over eight years in one West Virginia county ravaged by opioid addiction.

The verdict came nearly a year after closing arguments in a bench trial in the lawsuit filed by Cabell County and the city of Huntington against AmerisourceBergen Drug Co., Cardinal Health Inc. and McKesson Corp.

“The opioid crisis has taken a considerable toll on the citizens of Cabell County and the City of Huntington. And while there is a natural tendency to assign blame in such cases, they must be decided not based on sympathy, but on the facts and the law,” U.S. District Judge David Faber wrote in the 184-page ruling. “In view of the court’s findings and conclusions, the court finds that judgment should be entered in defendants’ favor.”

Cabell County attorney Paul Farrell had argued the distributors should be held responsible for sending a “tsunami” of prescription pain pills into the community and that the defendants’ conduct was unreasonable, reckless and disregarded the public’s health and safety in an area ravaged by opioid addiction.

The companies blamed an increase in prescriptions written by doctors along with poor communication and pill quotas set by federal agents.

While the lawsuit alleged the distributors created a public nuisance, Faber said West Virginia’s Supreme Court has only applied public nuisance law in the context of conduct that interferes with public property or resources. He said to extend the law to cover the marketing and sale of opioids “is inconsistent with the history and traditional notions of nuisance.”

Faber noted that the plaintiffs offered no evidence that the defendants distributed controlled substances to any entity that didn’t hold a proper registration from the Drug Enforcement Agency or the state Board of Pharmacy. The defendants also had suspicious monitoring systems in place as required by the Controlled Substances Act, he said.

“Plaintiffs failed to show that the volume of prescription opioids distributed in Cabell/Huntington was because of unreasonable conduct on the part of defendants,” Faber wrote.

In a statement, Cardinal Health said the judge’s ruling “recognizes what we demonstrated in court, which is that we do not manufacture, market, or prescribe prescription medications but instead only provide a secure channel to deliver medications of all kinds from manufacturers to our thousands of hospital and pharmacy customers that dispense them to their patients based on doctor-ordered prescriptions.

“As we continue to fulfill our limited role in the pharmaceutical supply chain, we operate a constantly adaptive and rigorous system to combat controlled substance diversion and remain committed to being part of the solution to the opioid crisis.”

Attorneys for the plaintiffs said they were “deeply disappointed” in the ruling.

“We felt the evidence that emerged from witness statements, company documents, and extensive datasets showed these defendants were responsible for creating and overseeing the infrastructure that flooded West Virginia with opioids. Outcome aside, our appreciation goes out to the first responders, public officials, treatment professionals, researchers, and many others who gave their testimony to bring the truth to light.”

Huntington Mayor Steve Williams said the ruling was “a blow to our city and community, but we remain resilient even in the face of adversity.

“The citizens of our city and county should not have to bear the principal responsibility of ensuring that an epidemic of this magnitude never occurs again.”

The plaintiffs had sought more than $2.5 billion that would have gone toward abatement efforts. The goal of the 15-year abatement plan would have been to reduce overdoses, overdose deaths and the number of people with opioid use disorder.

Last year in Cabell County, an Ohio River county of 93,000 residents, there were 1,067 emergency responses to suspected overdoses — significantly higher than each of the previous three years — with at least 158 deaths. So far this year, suspected overdoses have prompted at least 358 responses and 465 emergency room visits, according to preliminary data from the state Department of Health and Human Resources’ Office of Drug Control Policy.

The U.S. addiction crisis was inflamed by the COVID-19 pandemic with drug overdose deaths surpassing 100,000 in the 12-month period ending in April 2021, according to the Centers for Disease Control and Prevention. That’s the highest number of overdose deaths ever recorded in a year.

The Cabell-Huntington lawsuit was the first time allegations involving opioid distribution ended up at federal trial. The result could have huge effects on similar lawsuits. Some have resulted in multimillion-dollar settlements, including a tentative $161.5 million settlement reached in May by the state of West Virginia with Teva Pharmaceuticals Inc., AbbVie’s Allergan and their family of companies.

In all, more than 3,000 lawsuits have been filed by state and local governments, Native American tribes, unions, hospitals and other entities in state and federal courts over the toll of opioids.

Most allege that either drug makers, distribution companies or pharmacies created a public nuisance in a crisis that’s been linked to the deaths of 500,000 Americans over the past two decades.

In separate, similar lawsuits, the state of West Virginia reached a $37 million settlement with McKesson in 2019, and $20 million with Cardinal Health and $16 million with AmerisourceBergen in 2017.