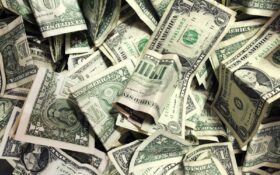 After four straight three-quarter-point interest rate hikes, the Federal Reserve is set to announce a smaller half-point increase in its key rate Wednesday, a first step toward dialing back its efforts to combat inflation.

At the same time, the Fed is expected to signal that it plans more hikes next year than it had previously forecast to try to conquer the worst inflation bout in four decades. And most economists think Chair Jerome Powell will stress that the Fed will likely keep its benchmark rate at its high point through next year, even after the hikes have ended.

The Fed’s decision Wednesday will follow a government report Tuesday that provided hopeful signs that inflation is finally easing from chronically high levels. Gas prices fell, the cost of used cars, furniture and toys declined, and the costs of services from hotels to airfares to car rentals dropped.

The six rate hikes the Fed has already imposed this year have raised its key short-term rate to a range of 3.75% to 4%, its highest level in 15 years. Cumulatively, the hikes have led to much costlier borrowing rates for consumers as well as companies, ranging from mortgages to auto and business loans. Worries have grown that the Fed is raising rates so much in its drive to curb inflation that it will trigger a recession next year.

Yet with price increases still uncomfortably high — inflation was 7.1% in November compared with a year earlier — Powell and other Fed officials have underscored that they expect to keep rates at their peak for an extended period.

With inflation pressures now easing, though, most economists think the Fed will further slow its hikes and raise its key rate by just a quarter-point at its next meeting early next year.

“The data (Tuesday) kind of fits with our idea that the Fed will downshift further in February,” said Matthew Luzzetti, an economist at Deutsche Bank and a former research analyst at the Fed. “Downshifting helps to maximize their prospects of a soft landing,” in which the Fed’s rate hikes would slow growth and tame inflation but not tip the economy into a recession.

On Wednesday, members of the Fed’s rate-setting committee will also update their projections for interest rates and other economic barometers for 2023 and beyond. Most analysts have forecast that they will pencil in a peak range of at least 4.75% to 5%, or even 5% to 5.25%, up from their September forecast of 4.5% to 4.75%.

Despite Powell’s recent hard-line remarks — he said late last month that “we have not seen clear progress on slowing inflation” — he and other Fed officials have made clear that they’re ready to dial down the pace of rate hikes. In doing so, they will have time to assess the impact of the increases they’ve already imposed. Those hikes have sent home sales plummeting and are starting to reduce rents on new apartments, a leading source of high inflation.

Fed officials have also said they want rates to reach “restrictive” levels that slow growth and hiring and bring inflation down to the their annual target of 2%.

“What policy rate is sufficiently restrictive we will only learn over time by watching how the economy evolves,” said Lisa Cook, one of seven members of the Fed’s Board of Governors. “Given the tightening already in the pipeline, I am mindful that monetary policy works with long lags.”

Fed officials have stressed that more important than how fast they raise rates is how long they keep them at or near their peak. In September, the Fed forecast it would do so through 2023. Yet Wall Street investors are now betting that the Fed will reverse course and start cutting rates before the end of next year.

In remarks late last month, Powell said he was tracking price trends in three different categories to best understand the likely path of inflation: Goods, excluding volatile food and energy costs; housing, which includes rents and the cost of homeownership; and services excluding housing, such as auto insurance, pet services and education.

In his speech, Powell noted that there had been some progress in easing inflation in goods and housing but not so in most services. Some of those trends extended into last month’s data, with goods prices, excluding food and energy, falling 0.5% from October to November, the second straight monthly drop.

Housing costs, which make up nearly a third of the consumer price index, are still rising. But real-time measures of apartment rents and home prices are starting to drop after having posted sizzling price acceleration at the height of the pandemic. Powell said those declines will likely emerge in government data next year and should help reduce overall inflation.

As a result, Powell’s biggest focus has been on services, which he said are likely to stay persistently high. In part, that’s because sharp increases in wages are becoming a key contributor to inflation. Services companies, like hotels and restaurants, are particularly labor-intensive. And with average wages growing at a brisk 5%-6% a year, price pressures keep building in that sector of the economy.

How the Fed will slow a robust labor market to help bring down inflation could prove perilous. Powell and other Fed officials have said they hope their rate hikes will slow consumer spending and job growth. Businesses would then remove many of their job openings, easing the demand for labor. With less competition for workers, wages could begin to grow more slowly.

Powell has even named a wage target: He regards annual pay growth at a rate of about 3.5% as compatible with 2% inflation. Right now, average pay is growing about 5%-6% a year.