Fed up! NYPD turns against liberal mayor - The Horn News 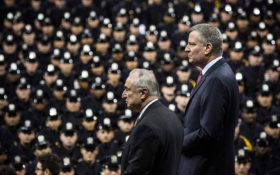 Now he’s getting a taste of his own medicine.

The New York Police Department is standing up to the mayor — and is still reporting illegal immigrant court appearances to federal immigration officials.

Under de Blasio’s “sanctuary city” vow, authorities are supposed to only alert federal officials when an illegal immigrant is accused of very specific crimes.

But the NYPD’s respect for their duty is outweighing their respect for de Blasio’s unlawful agenda.

Officers have continued to follow procedure and contact relevant law enforcement agencies, including Immigration and Customs Enforcement, when verifying warrants. This informs ICE of an upcoming court date for an illegal immigrant, allowing them to attend the court hearing and detain illegals following the court appearance.

The New York Daily News reported that ICE had been notified of the arrests of at least two criminal illegals.

On March 2nd, the arrest of David Gonzales, a 51 year-old once deported felon, was reported to ICE by an NYPD administrative aide.

Gonzalez had reentered the U.S. and was facing charges for allegedly rubbing up against a woman on the train.

After Gonzalez was released by the judge, he was immediately taken into custody by ICE.

Another illegal, Milton Chimborazo, 35, was arrested on March 15th for burglary charges and was set to be deported. ICE did not take him into custody, but was aware of his arrest and inquired about him.

Chimborazo’s roommate told The Daily News that he had not seen him since his court appearance.

A spokesman for de Blasio said that ICE and the NYPD communicate regularly.

It appears de Blasio’s plan to sabotage Trump’s immigration order is failing miserably, and the boys in blue are still doing what they know is right.