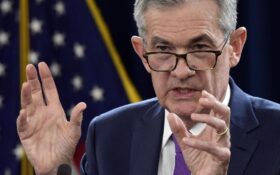 Federal Reserve Chair Jerome Powell delivered a stark message Friday: The Fed is determined to fight inflation with more sharp interest rate hikes, which will likely cause pain for Americans in the form of a weaker economy and job losses.

“These are the unfortunate costs of reducing inflation,” Powell said in a high-profile speech at the Fed’s annual economic symposium in Jackson Hole. “But a failure to restore price stability would mean far greater pain.”

Investors had been hoping for a signal from Powell that the Fed might soon moderate its rate increases later this year if inflation were to show further signs of easing. But the Fed chair indicated that that time may not be near.

Runaway price increases have soured most Americans on the economy, even as the unemployment rate has fallen to a half-century low of 3.5%. It has also created political risks for President Joe Biden and congressional Democrats in this fall’s elections, with Republicans denouncing Biden’s $1.9 trillion financial support package, approved last year, as having fueled inflation.

Stocks tumbled after Powell’s remarks, and bond yields rose, a sign that investors foresee more large interest rate hikes ahead. Some on Wall Street expect the economy to fall into recession later this year or early next year, after which they expect the Fed to reverse itself and reduce rates.

A number of Fed officials, though, have pushed back against that notion. Powell’s remarks suggested that the Fed is aiming to raise its benchmark rate — to about 3.75% to 4% by next year — yet not so high as to tank the economy, in hopes of slowing growth long enough to conquer high inflation.

“The idea they are trying to hammer into the market’s head is that their approach makes a rapid pivot to (rate cuts) unlikely,” said Eric Winograd, an economist at asset manager AllianceBernstein. “They are going to stay tight even when it hurts.”

After raising its key short-term rate by a steep three-quarters of a point at each of its past two meetings — part of the Fed’s fastest series of hikes since the early 1980s — Powell said the Fed might ease up on that pace “at some point” — suggesting that any such slowing isn’t near.

Powell said the size of the Fed’s rate increase at its next meeting in late September — whether one-half or three-quarters of a percentage point — will depend on inflation and jobs data. An increase of either size, though, would exceed the Fed’s traditional quarter-point hike, a reflection of how severe inflation has become.

The Fed chair said that while lower inflation readings that have been reported for July have been “welcome,” he added that, “a single month’s improvement falls far short of what (Fed policymakers) will need to see before we are confident that inflation is moving down.”

On Friday, an inflation gauge that is closely monitored by the Fed showed that prices actually declined 0.1% from June to July. Though prices did jump 6.3% in July from 12 months earlier, that was down from a 6.8% year-over-year jump in June, which had been the highest since 1982. The drop largely reflected lower gas prices.

In his speech Friday, Powell noted that the history of high inflation in the 1970s, when the central bank sought to counter high prices with only intermittent rate hikes, shows that the Fed must stay focused.

“The historical record cautions strongly against prematurely” lowering interest rates, he said. “We must keep at it until the job is done.”

What particularly worries Powell and other Fed officials is the prospect that inflation would become entrenched, leading consumers and businesses to change their behavior in ways that would perpetuate higher prices. If, for example, workers began demanding higher pay to match higher inflation, many employers would then pass on those higher labor costs to consumers in the form of higher prices.

Many analysts speculate that Fed officials want to see roughly six months or so of lower monthly inflation readings, similar to July’s, before stopping their rate hikes.

Powell’s speech was the marquee event of the the Fed’s annual economic symposium at Jackson Hole, the first time the conference of central bankers is being held in person since 2019, after it went virtual for two years during the COVID-19 pandemic.

Since March, the Fed has implemented its fastest pace of rate increases in decades to try to curb inflation, which has punished households with soaring costs for food, gas, rent and other necessities. The central bank has lifted its benchmark rate by 2 full percentage points in just four meetings, to a range of 2.25% to 2.5%.

Those hikes have led to higher costs for mortgages, car loans and other consumer and business borrowing. Home sales have been plunging since the Fed first signaled it would raise borrowing costs.

In June, the Fed’s policymakers signaled that they expected their key rate to end 2022 in a range of 3.25% to 3.5% and then to rise further next year to between 3.75% and 4%. If rates reached their projected level at the end of this year, they would be at the highest point since 2008.

Powell is betting that he can engineer a high-risk outcome: Slow the economy enough to ease inflation pressures yet not so much as to trigger a recession.

His task has been complicated by the economy’s cloudy picture: On Thursday, the government said the economy shrank at a 0.6% annual rate in the April-June period, the second straight quarter of contraction. Yet employers are still hiring rapidly, and the number of people seeking unemployment aid, a measure of layoffs, remains relatively low.

At its meeting in July, Fed policymakers expressed two competing concerns that highlighted their delicate task.

According to minutes from that meeting, the officials — who aren’t identified by name — have prioritized their inflation fight. Still, some officials said there was a risk that the Fed would raise borrowing costs more than necessary, risking a recession. If inflation were to fall closer to the Fed’s 2% target and the economy weakened further, those diverging views could become hard to reconcile.

At last year’s Jackson Hole symposium, Powell listed five reasons why he thought inflation would be “transitory.” Yet instead it has persisted, and many economists have noted that those remarks haven’t aged well.

Powell indirectly acknowledged that history at the outset of his remarks Friday, when he said that, “at past Jackson Hole conferences, I have discussed broad topics such as the ever-changing structure of the economy and the challenges of conducting monetary policy.”

“Today,” he said, “my remarks will be shorter, my focus narrower and my message more direct.”