February's inflation report is here... and it's not pretty - The Horn News 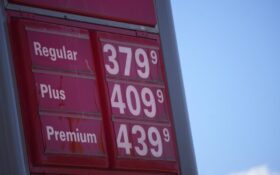 Propelled by surging costs for gas, food and housing, consumer inflation jumped 7.9% over the past year, the sharpest spike since 1982 and likely only a harbinger of even higher prices to come.

The increase reported Thursday by the Labor Department reflected the 12 months ending in February and didn’t include the oil and gas price surges that followed Russia’s invasion of Ukraine on Feb. 24. Since then, average gas prices nationally have jumped about 62 cents a gallon to $4.32, according to AAA.

Even before the war further accelerated price increases, robust consumer spending, solid pay raises and persistent supply shortages had sent U.S. inflation to its highest level in four decades. What’s more, housing costs, which make up about a third of the government’s consumer price index, have risen sharply, a trend that’s unlikely to reverse anytime soon.

“The numbers are eye-watering, and there is more to come,” said Eric Winograd, senior economist at asset management firm AllianceBernstein. “The peak in inflation will be much higher than previously thought and will arrive later than previously expected.”

The Labor Department’s report Thursday showed that from January to February, inflation rose 0.8%, up from a 0.6% increase from December to January. Excluding the volatile food and energy categories, so-called core prices rose a sharp 0.5% month to month and 6.4% from a year earlier. Economists tend to monitor core prices because they more closely reflect longer-running inflation trends.

For most Americans, inflation is running far ahead of the pay raises that many have received in the past year, making it harder for them to afford necessities like food, gas and rent. As a consequence, inflation has become the top political threat to President Joe Biden and congressional Democrats as the midterm elections draw closer. Small business people say in surveys that it’s their primary economic concern, too.

From January to February, nearly every category of goods and services got pricier. Grocery costs jumped 1.4%, the sharpest one-month increase since 1990, other than during a pandemic-induced price surge two years ago. The collective price of fruits and vegetables rose 2.3%, the largest monthly increase since 2010. Gas prices spiked 6.6%, clothing 0.7%.

For the 12 months ending in February, grocery prices leapt 8.6%, the biggest year-over-year increase since 1981, the government said. Gas prices are up a whopping 38%. And housing costs have risen 4.7%, the largest yearly jump since 1991.

Lydia Boussour, an economist at Oxford Economics, estimates that if oil remains at $120 a barrel for the rest of this year — which it topped Tuesday before slipping — it would cost U.S. households $1,500, on average. It would also weaken economic growth by about 0.8 percentage point this year, she said. Many economists have cut their growth estimates for 2022 by roughly a half-point to about 2.5%.

Across the country, everyday Americans as well as companies are struggling with the inflation spike and trying to minimize its impact.

In San Jose, California, Maurice Brewster, the founder of Mosaic Global Transportation, a limousine and transportation company with nearly 100 vehicles, has been hammered by gas prices. A couple of months ago, Brewster had been paying $4 a gallon. On Monday, the price was $6.39.

“Inflation has been a killer,” he said. “I feel it every day.”

Energy prices, which soared after Russia’s invasion of Ukraine, jumped again this week after Biden said the United States would bar oil imports from Russia. Oil prices did retreat Wednesday on reports that the United Arab Emirates will urge fellow OPEC members to boost production. But they rose again Thursday.

The Biden White House — always critical of the private sector — has attributed much of the inflation surge to the ability of a few corporate giants to dominate industries and squeeze out competition that would otherwise lower prices. The administration argues that meat prices, for example, are higher because four meat-packing firms control the industry. Far-left Sen. Elizabeth Warren, D-Mass., has been arguing this, as well.

In reality, there remains dispute over how much of the inflation spike is driven by corporate profiteering.

In his State of the Union address last week, Biden asserted that the U.S. should manufacture more goods at home, rather than overseas, to avoid the supply chain backups that are bedeviling many companies. Yet producing more competition or more home-grown products would take time and wouldn’t reduce inflation anytime soon.

Republicans in Congress and many economists say the Biden administration’s $1.9 trillion financial rescue package, which distributed stimulus checks to tens of millions of households during an economic boom, contributed to high inflation by accelerating consumer spending.

However, some Americans are finding causes for optimism.

Month-over-month inflation remains elevated, and it increased during the month of February. However, it remains well below its peak in spring and summer of 2021. During those spring months, prices were rising at an annualized rate of more than 10 percent.

Plus, the Federal Reserve is set to begin inflation-fighting mode. The nation’s central bank is set to raise interest rates several times this year, beginning with a quarter-point hike next week. Granted, the Fed faces a delicate challenge. If it tightens credit too aggressively this year, it risks undercutting the economy and possibly triggering a recession. Most economists, though, say they think the U.S. economy is growing strongly enough that another recession is unlikely.

Unemployment remains around 4 percent. During the Great Lockdown of 2020, it was at 18 percent.

Sure enough, Biden has seen a small bump in his approval rating amid the Ukraine crisis and the State of the Union. He was hovering at 40.4 percent approval on Feb. 27, according to FiveThirtyEight’s poll average. On Wednesday, he jumped to 42.7 percent.