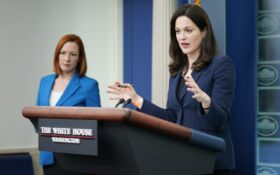 The FBI is warning that it has seen increased interest by Russian hackers in energy companies since the start of Russia’s war against Ukraine, though it is offering no indication that a specific cyberattack is planned.

An FBI advisory obtained by The Associated Press on Tuesday says Russian hackers have scanned at least five energy companies for vulnerabilities and at least 18 other companies in sectors including the defense industrial base and financial services. The advisory does not identify any of the companies.

Scanning a network for flaws or vulnerabilities is common and does not indicate that an attack is forthcoming, though the activity can sometimes be a precursor of one. Still, the warning by the FBI, dated Friday, underscores the Biden administration’s heightened cybersecurity concerns due to Russia’s war with Ukraine.

On Monday, the White House said there was “evolving intelligence” indicating that Russia was considering launching cyberattacks against critical infrastructure in the U.S. Anne Neuberger, the White House’s deputy national security adviser for cyber and emerging technologies, expressed frustration at a White House press briefing that some critical infrastructure entities have failed to fix known software flaws that could be exploited by Russian hackers.

Meanwhile, the Cybersecurity and Infrastructure Security Agency convened a call Tuesday with more than 13,000 industry stakeholders to warn about the potential for future cyberattacks and to reinforce the need to act now to protect themselves.

The FBI advisory shares 140 internet protocol, or IP, addresses that it says have been previously associated with the scanning of critical infrastructure in the U.S. since at least March 2021. That scanning has increased since the start of the war last month, the alert says, “leading to a greater possibility of future intrusions.”

The advisory says that though the FBI recognizes that scanning activity is common, the IP addresses are associated with cyber actors who have previously “conducted destructive cyber activity against foreign critical infrastructure.” In this instance, the advisory said, the scanning activity “likely indicates early stages of reconnaisance.”