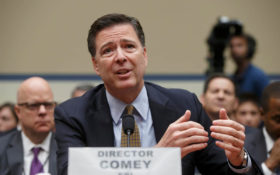 Former FBI Director James Comey had a rough few years near the end of his career.

Comey’s mishandling of Hillary Clinton’s email scandal left him in the doghouse with both Republicans and Democrats. Under his watch, former President Barack Obama was able to obtain illegal wiretaps on Donald Trump’s presidential campaign. Meanwhile, Russian meddling in our election and in supporting the so-called anti-Trump “resistance” went unchecked.

Now, a shocking new report from the Department of Justice, first uncovered by The Daily Caller,  shows that from the top to the bottom, the FBI grew out-of-control during Comey’s tenure.

According to the report, the DoJ’s inspector general sanctioned at least 14 FBI agents and employees for a host of sexual misconduct since 2014 — almost all while under the command of Comey.

“According to the Justice Department inspector general’s enforcement summaries, which [The Daily Caller] reviewed, FBI agents and officials engaged in a variety of improper sexual relationships and harassment throughout the bureau,” The DC reported Sunday. “Inspector General Michael E. Horowitz published at least 14 instances of improper sexual conduct. The latest incident was reported only last week.”

Just before Comey’s arrival in 2014, the inspector general’s office had filed only one sexual misconduct charge against FBI employees over a span of four years. That quickly changed during Comey’s tenure.

“The acts entail inappropriate romantic relationships with a subordinate, outright sexual harassment, favoritism or promotion based on demands for sex, and retaliation against women who rebuffed male employee’s advances,” The Daily Caller reported.

A botched investigation into Hillary’s illegal email server. Illegal wiretapping of the Trump campaign. All while failing to properly investigate terror threats like that of the Florida High School shooter?

Add out-of-control sex scandals to that list as the eternal legacy of James Comey.

How will history judge James Comey?