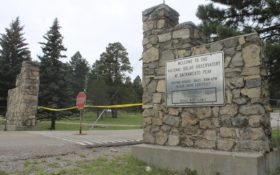 The mountaintop Sunspot Solar Observatory closed from Sept. 6 to Sept. 17, but the research association that manages it has said only that an unspecified security issue was the reason for the closure.

The facility employs a small group of scientists, researchers and students to capture some of the sharpest images of the sun available in the world.

The search warrant filed last week in federal court in Las Cruces said the facility’s chief observer, who was not identified, told FBI agents in August he found a laptop computer with child pornography several months earlier but did not immediately report the discovery to authorities because he was “distracted” by an unspecified urgent issue at the observatory.

The search warrant provided to a judge the justifications for agents to search computers, cellphones or tablets owned by the janitor, Joshua Lee Cope, and the house trailer where he lives.

An FBI agent seized the laptop at the observatory on Aug. 21, 2018, and took it to the FBI office in Las Cruces, court documents said.

FBI spokesman Frank Fisher said Thursday that no one has been charged and the investigation is ongoing.

Cope, 30, lives on property owned by his parents in La Luz, the search warrant said. A phone message left for Cope at a telephone number listed for his parents seeking comment was not immediately returned.

After Cope could not find his laptop, the court documents said, he began to act frantically and told the chief observer that there was a “serial killer in the area, and that he was fearful that the killer might enter the facility and execute someone.”

The observatory closed, without consulting FBI agents, after Cope’s comments about the serial killer and his erratic behavior, the warrant said.

The Association of Universities for Research in Astronomy, the group that manages the site under a cooperative agreement with the National Science Foundation, declined comment on the details about the observatory in the court documents.

Lifson declined to say whether Cope was still an employee.

The Sunspot Solar Observatory was established in 1947 atop Sacramento Peak in Lincoln National Forest and overlooks Tularosa Basin — an expanse of desert that includes the city of Alamogordo, Holloman Air Force Base, White Sands Missile Range, White Sands National Monument and the site of the world’s first atomic bomb test.

The observatory was built by the U.S. Air Force. After several years of operation, it was transferred to the National Solar Observatory, which is part of the National Science Foundation.

Data from observations done at Sunspot is sent to New Mexico State University servers and can be used by researchers around the world.