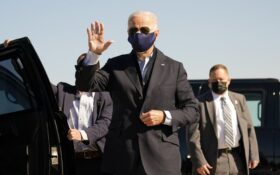 But now it seems like his biggest support base could be in trouble, thanks to the FBI.

Friday morning at 7 a.m., the FBI raided a major Philadelphia electricians’ union headquarters according to Washington Free Beacon. Their headquarters is covered in a giant Biden 2020 banner.

Local 98 electricians’ union, “a chapter of the larger International Brotherhood of Electrical Workers” which endorsed Biden in February, is very familiar with federal agents. Although federal officials have yet to announce a reason for the Friday raid, the union has a rap sheet that precedes itself.

In 2019, the chapter’s boss was indicted by the Department of Justice on embezzlement charges. John Dougherty Jr. last year was arrested along with Democratic councilman Bobby Henon as part of a large-scale investigation over allegedly misused union funds.

The FBI’s recent raid is only the start of Biden’s union problems. The dust, it seems, is still settling.

In his most recent town hall appearance last Thursday, Biden apparently made a big gaffe on live television.

He told ABC News’ George Stephanopoulos that a local Pittsburgh union — the Boilermakers Local 154 — endorsed him.

But according to the union, they’ve endorsed President Donald Trump for re-election.

Someone should tell @JoeBiden that here in PA the Boilermakers he claims are overwhelmingly supporting him endorsed President @realDonaldTrump last month. pic.twitter.com/yWhB5PKTlx

“The other day I’m watching the debate and I see Joe Biden tell everybody that the Boilermakers endorsed him and that is not true, and I would like somebody to tell me who — he said he talked to somebody — I’d like to know who he talked to in the Boilermakers because anybody I talk to did not endorse him,” Hughes said.