Fatou the gorilla celebrates her 60th birthday with cake [pics!] - The Horn News 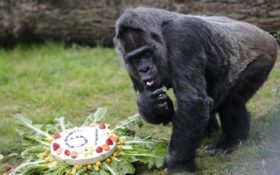 Fatou the gorilla, believed to be one of the world’s oldest, is celebrating her 61st birthday at Berlin’s zoo — nearly six decades after she found her way to Germany from a French bar.

Zookeepers on Friday presented Fatou a rice cake decorated with the number 61 in fruit.

The zoo says she shares the title of world’s oldest female gorilla with Trudy, a gorilla at the zoo in Little Rock, Arkansas.

Still, it’s not entirely clear how old she is. Fatou arrived in Berlin in 1959, finding her way there after a sailor used the young gorilla as payment at a bar in the French port city of Marseille.

She isn’t the oldest inhabitant of the zoo, however. Ingo the flamingo, who arrived there in 1948, has that honor.